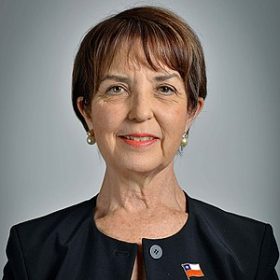 A potential fibre-optic submarine cable project to directly connect South America and Asia has been allocated US$3m for a feasibility study. Chile’s Transportation and Telecommunications ministry is financing the study alongside the Development Bank of Latin America (CAF).

The 24,000km trans-Pacific cable has attracted the interest of Huawei of China and NEC of Japan. Huawei is already working in Chile deploying a fibre-optic cable that is linking the south of the country to the north.

Chile says it is now accepting bids for the feasibility study, with the ministry expecting the results to be available by June 2020. If the project is given the green light, a tender for the submarine project will then be launched.

Gloria Hutt (pictured), Chile’s telecommunication’s minister, said the cable would position the country as the “gateway for the entry of data to the region and as an attractive location to establish data centres”.

Argentina, Brazil and Ecuador have also expressed interest in getting involved in the cable project. Both Huawei and NEC submitted pre-feasibility studies for the cable in 2017, which included potential routes for it across the Pacific Ocean.

Google recently landed its 10,000km four-fibre pair Curie submarine cable from Los Angeles to Valparaíso, Chile. The cable will aid speedier and more efficient data services between the US and Latin America and will also support Google’s own growth plans across the region.

The Valparaíso landing station is being linked to the Google data centre located at Quilicura, near the capital Santiago, which was officially opened last year. It is the first new submarine cable to land in Chile for about 20 years, with Valparaíso connected to one of Equinix’s data centres in Los Angeles.