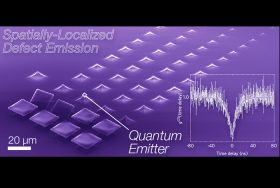 Efforts to create reliable, light-based quantum computing, quantum key distribution for cybersecurity, and other technologies has received a boost from a new study demonstrating an innovative method for creating thin films to control the emission of single photons.

The scalability of these two-dimensional, tungsten/selenium thin films makes them potentially useful in processes to manufacture quantum technologies. Single-photon generation is a requirement for all-optical quantum computing and key distribution in quantum communications, and it is crucial for advancing quantum information technologies.

The project, documented as a Featured Article in the journal Applied Physics Letters, exploits strain at highly spatially localised and well-separated emission sites, or tips, in a tungsten/selenium film. The team synthesised the film through chemical vapour deposition using a multi-step, diffusion-mediated gas source.

The researchers note that because the material is very thin, it conforms to the radius of the tips and the material bends towards the substrate by more than a few percent, like someone lying on a bed of nails. The resulting strain is enough to change the electronic structure, but only at the tips. The affected area emits light of a different colour and nature than light from the rest of the film.

“While more research is needed to fully understand the role of mechanical deformation in creating these quantum emission sites, we may enable a route to control quantum optical properties by using strain,” Pettes said. “These single-photon sources form the basis for photonics-based, all-optical quantum computing schemes.”

Engineering of quantum emission in 2D materials is still in a very early stage, the authors admit. While studies have observed single photons originating from defect structures in these materials, previous work has suggested that non-uniform strain fields might govern the effect. However, the mechanism responsible for this emergent phenomenon remains unclear and is the focus of ongoing work at Los Alamos.

Funding: The work at Los Alamos National Laboratory was funded by the US Laboratory Directed Research and Development Program (LDRD 20190516ECR) and the Centre for Integrated Nanotechonogies (CINT), a DoE nanoscience research centre jointly operated by Los Alamos and Sandia national laboratories. Upgrades to the tandem accelerator were funded by the Principal Associate Directorate for Science, Technology, and Engineering capital investment fund and the CINT capability development fund.