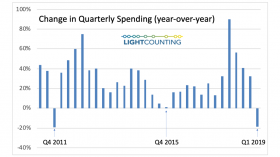 A new report from LightCounting suggests that a sharp decline in Q1 2019 infrastructure spending by cloud companies may spell trouble ahead for the global optical communications market. The market research company notes that infrastructure investments by the cloud companies have supported the sales growth of optical communications equipment, modules and components since 2010. Combined spending of the top 15 cloud vendors tracked by LightCounting set a new record of close to $100 billion in 2018. However, a minus 20% change in Q1 2019 spending raises concerns.

The accompanying figure illustrates the changes in quarterly spending of the top 15 cloud companies since 2011, showing a decline in Q4 2011 and a slowdown in Q4 2015, prior to this most recent drop in Q1 2019. If history repeats itself, the spending trend should bounce back upward in Q2 2019. However, the drop in Q1 2019 may prove to be the start of a longer-term slowdown in spending by the cloud companies.

LightCounting says the previous drops in quarterly data (Q4 2011 and Q4 2015) were mostly due to fluctuations in spending by Google. Subtracting Google’s contribution to these numbers brings the trend back to growth of 20% to 25% in both Q4 2011 and Q4 2015. This was not the case in Q1 2019. A drop in Google’s spending contributed to the decline, but this spending decline was much more broad-based. Out of the top 15 cloud companies 9 reported declines in spending including Alibaba, Apple, Microsoft and Tencent.

The report calculates that combined revenues of the top 15 cloud companies were up 11% in Q1 2019, compared to Q1 2018, despite seasonal sequential declines. It suggests, though, that the changing economic outlook must be impacting the investment decisions of these companies, along with an expected increasing tax burden, fines for mishandling data and monopolistic practices, and further looming regulation. 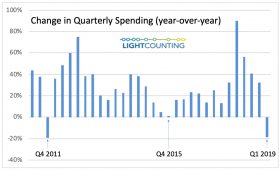 LightCounting states that the Chinese economy is clearly slowing down, and prospects for growth around the world are more uncertain. The escalating trade war between China and the US is clearly taking its toll. The market research firm’s judgement is that it is very unlikely that these two countries can reach a trade deal in 2019-2020. The US-imposed sanctions against Huawei was a clear declaration of war and neither side is likely to compromise given the raging nationalistic moods on both sides of the Pacific.

Suppliers of semiconductor ICs, led by Intel, anticipated a decline in sales for the first half of 2019 back in the end of 2018. Their latest forecasts for the whole year were revised further down, and Huawei’s ban is partly to blame. Broadcom reduced guidance for their fiscal year ending in the fall of 2019 by $2 billion, attributing about $0.5 billion of that to the loss of sales to Huawei, and the rest to “very, very nervous customers” concerned about the global economy. Broadcom did comment that their wireline networking and switching business is still growing despite steep declines in all other market segments.

On a more positive note, LightCounting’s June 2019 Quarterly Market Update report observes that, in contrast to the cloud companies, leading telecom service providers do not cancel their infrastructure upgrades projects abruptly. Slower economic growth in China is likely to lead to more government funded infrastructure projects, including 5G deployments. These will have a direct positive impact on transceiver sales in 2019, compensating for a potential decline in sales to the cloud companies.