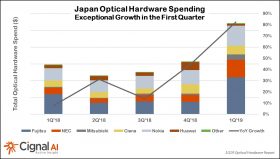 Japan’s optical hardware spending surge continued for the fourth quarter in a row with an extraordinary 82% year-over-year increase in the first quarter of 2019 according to the most recent Optical Hardware Report from market research firm Cignal AI. Prime beneficiaries were domestic suppliers NEC, Mitsubishi and Fujitsu along with Ciena and Nokia, all of which posted significant gains during the quarter.

“The exceptional optical market growth in Japan is the story to watch for 2019,” said Scott Wilkinson, lead analyst for Optical Hardware at Cignal AI. “Network operators have begun significant network rebuilds and expansions, and domestic as well as non-Japanese vendors continue to grow sales in the region at remarkable rates.”

North American optical sales did not experience an anticipated turnaround in 1Q19. Continued growth in sales to cloud and colo operators was offset by slowdowns among traditional telco operators who are focusing capex in other areas such as 5G wireless rollouts.

Additional key findings in the 1Q19 Optical Hardware Report include:

Cignal AI’s Optical Hardware Report is issued each quarter and examines optical equipment revenue across all regions and equipment types. The analysis is based on financial results, independent research, and guidance from individual equipment companies. Forecasts are based on overall spending trends for equipment types within the regions.