400G is now under release over multiple form-factors: QSDFP-DD, OSFP and CFP8. While the short-term deployment is on the access side, and mainly for intra-DC application, other applications such as DCI and transmission are also going on the 400G direction.

As we are now getting familiar with the form-factors and the PAM4 modulation, it is time to investigate and understand the different optics types and their applications. 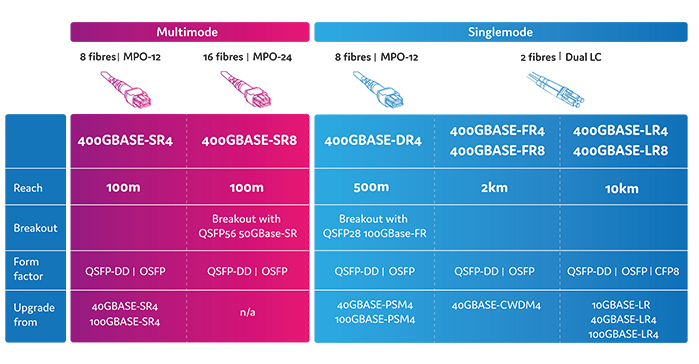 The product is built with 8 VCSEL lasers emitting at 850nm with a 50Gbps PAM4 modulation and doesn’t include any gearbox, so the overall cost of the module remains low.

The 400GBASE-SR4 is technically more complex than the 400GBASE-SR8 but it has the great advantage of being interoperable with an upgrade from 40GBASE-SR4 and 100GBASE-SR4.
It has 4 VCSEL 850nm lasers cadenced at 100Gbps PAM4 thanks to the internal gearbox converting 8x 50Gbps PAM4 to 4x 100Gbps PAM4. The cost of that module is higher than the SR8 but will drop over time due to the volume and gearbox price erosion.

The 400-BiDi is under development and will be different compared to the famous 40G-SRBD and 100G-SRBD/SWDM4. It allows for a 40G or 100G transmission over a pair of multimode fibres.
The 400G BiDi will have an MPO connector allowing a breakout application from 1x QSFP-DD BiDi to 4x QSFP28 BiDi; which can be used for TOR switch to servers.

The 400GBASE-FR4/FR8 is the 100GBASE-CWDM4 equivalent and the most common solution for short reach (max 2km) over a pair of single-mode fibres. It is a cost-effective solution built on 4x CWDM lasers (FR4) or 8x CWDM lasers (FR8) with an embedded optical multiplexer/demultiplexer. The FR4 requires a gearbox (8x 50Gbps PAM4 to 4x 100Gbps PAM4) while the FR8 doesn’t.

The 400GBASE-DR4 is built with 4x lasers operating at the same wavelength. Another version called XDR4 is also available and is very similar to the DR4 except that it has a longer reach (2km instead of 500m).

This article was written
by Ambroise Thirion