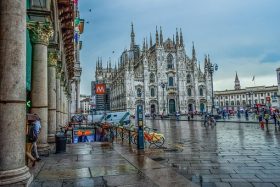 Telia Carrier, WorldStream and PhoenixNAP have all added new fibre connectivity points-of-presence in the Milan region.

“The SUPERNAP data centre is an ideal location for our Milan PoP,” said Davide Binaghi, managing director of Telia Carrier Italy. “The facility’s unparalleled resiliency, reliability and security matches the commitment we have to our own infrastructure. We believe its customer base will greatly benefit from Telia Carrier’s Cloud Connect service.” SUPERNAP Italia is a Tier 4, modular, carrier-neutral colocation facility in Siziano, 20km from central Milan.

With another Milan PoP, WorldStream is reducing infrastructure-as-a-service latency. The expansion of the company’s network will help improve performance for customers across Southern Europe, as the firm further expands its footprint outside its Netherlands base.

WorldStream’s PoP is located in one of IRIDEOS’ 15 data centres in Italy, in Milan to increase IaaS service speeds and reduce latency for customers. Since its foundation in 2006, WorldStream has built a proprietary global network with a total current capacity of 10 terabits per second, with a maximum network utilisation of 50% to provide customers with high-scalability options.

The company currently has more than 15,000 dedicated servers under management in its company-owned data centres in the Netherlands, providing IaaS hosting services to a global customer base that includes cloud service providers, managed service providers, system integrators, broadcasters, ISPs, ISVs and corporates of all sizes.

Lennert Vollebregt, CEO and co-owner of WorldStream, said: “I could share a lot of details on the technical specifications of this fully 100G equipped global network, but I think the results speak for themselves.Very recently, we’ve experienced several large-scale distributed denial-of-service attacks on our network, with attacks of even 350Gbps and more, but our 10Tbps network volume and scrubbing techniques were easily capable of protecting the availability of our clients’ IT and web infrastructures.The new PoP in Milan will further enhance these capabilities as well as the network speed and latency in Southern Europe.”

US-headquartered PhoenixNAP has also just established a new network PoP in Milan. With the node, phoenixNAP brings its European presence to a total of six locations, two of which are full service production nodes – Amsterdam, The Netherlands and Belgrade, Serbia.

The PoP extends phoenixNAP’s global data centre network to 14 locations globally. Ian McClarty, president of phoenixNAP, said: “The launch of the Milan node is another important milestone in our European expansion. Our global network locations are strategically selected to support the location-based IT needs of our customers in Europe and those in the US that would like to expand to Europe. As a major metro area and an IT hub, Milan will give a significant boost to our high-speed network.”