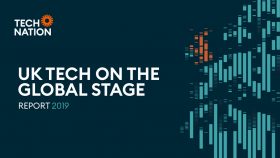 The Tech Nation Report is an annual review of the state of the UK’s technical development and associated investment in relation to the international marketplace. Since its launch in 2015, the annual report looks into the evolution of the UK’s “tech ecosystem”, exploring the drivers that underpin and power economic growth within the sector.

Tech Nation, based in Shoreditch, London, describes itself as a “UK network for ambitious tech entrepreneurs,” which is 80 percent-funded (GBP5.2 million in 2018-2019) by the UK Government’s Department for Digital, Culture, Media & Sport. Other funding is generated from sponsorship and paid-for educational programmes.

Its latest report states, “The UK has long been understood to be a critical hub in the global tech ecosystem and a strong economic performer, and so for the first time this year, the report explores the UK in the wider international landscape.”

Some of the key statistics highlighted in the report include the following: Total 2018 venture capital investment in UK tech topped GBP6 billion; the UK employs 5% of all high-growth tech workers globally, and the UK lies in fourth places in the world for scale up investment after US, China and India. Furthermore, the UK is leading the world in financial technology development – investment in high-growth fintech firms totalled GBP4.5 billion between 2015 and 2018.

Theresa May and several other Government ministers have contributed comments to the latest Tech Nation report. May commented, ‘‘The UK is a global tech powerhouse. These companies are delivering significant economic value to the nation through the investment they raise, the jobs they create and the innovative products and services they deliver.’’

The Government-funded report states, “Investment for UK high-growth digital tech firms grew 61% between 2017 and 2018 – driven in large part by ambitious UK tech scale ups. Tech scale ups delivered the majority of all tech investments in the UK in 2018 – GBP5 billion of GBP6.3 billion.”

In terms of UK hotspots for high-tech investments and developments, London continues to be the UK leader in attracting high-growth tech investment, receiving GBP9 billion from 2015 to 2018. Cambridge is in second place, at GBP583 million.

Philip Hammond MP, Chancellor, commented, “The UK tech sector continues to grow strongly with UK firms attracting the most venture capital funding in Europe and investment in digital scale ups growing by almost two-thirds in a year. We are supporting British innovation so we can drive growth, jobs and higher living standards, including through GBP2.5 billion for the British Business Bank, to help high-growth firms to access the finance they need to succeed.”

Cyber, AI, and cleantech all feature in the top ten sectors for employment in high-growth tech firms. The report states that “Investment data shows that AI, Cyber and Big Data are growing in importance for UK tech scale ups. This means that the UK may be about to see more jobs generated in these sectors.”

Jeremy Wright MP, UK Secretary of State for Digital, Culture, Media and Sport, commented, “This report confirms the UK is one of the world’s leading digital economies, with some of the best minds globally working here and strong investment in the tech sector right across the country.”

In reaction to the report, Evan Wienburg, CEO, full-fibre infrastructure company TrueSpeed, based in the West of England commented, “We applaud Jeremy Wright for his call to transform the UK into the world’s leading digital economy. It’s really encouraging to see this support for the development of regional technology hubs, and the recognition that full fibre infrastructure is pivotal to enabling their success. The key to ensuring maximum prosperity for every citizen in the digital economy is to go one step further and boost the deployment of full fibre in rural areas as well as towns and cities. Only by connecting every corner of the UK will we encourage entrepreneurs and businesses based outside the usual conurbations to invest, innovate, and grow businesses that benefit their local communities.” He added, “Fundamentally, no business or community should be left behind. Which is why I call on the government to ensure that investment in rural prosperity is not overlooked at this vital stage.”

For a complete copy of the report, visit https://technation.io/report2019/