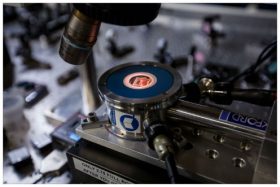 University of Copenhagen researchers have developed a nanocomponent that emits light particles carrying quantum information. Less than one-tenth the width of a human hair, the miniscule component makes it possible to scale up, and could ultimately reach the capabilities required for a quantum computer or quantum internet.

The focus of the researchers, based at the Center for Hybrid Quantum Networks (Hy-Q) at the University of Copenhagen’s Niels Bohr Institute, is on developing quantum communication technology based on light circuits, known as nanophotonic circuits. The UCPH researchers say they have now achieved a major advance in this field.

“It is a truly major result, despite the component being so tiny,” says Assistant Professor Leonardo Midolo, who has been working towards this breakthrough for the past five years.

The research team has invented a component, a nanomechanical router (pictured), that emits quantum information carried by photons and routes them into different directions inside a photonic chip. The component merges nano-opto-mechanics and quantum photonics – two areas of research that, until now, have never been combined.

“Bringing the worlds of nanomechanics and quantum photonics together is a way to scale up quantum technology. In quantum physics, it has been a challenge to scale systems. Until now, we have been able to send off individual photons. However, to do more advanced things with quantum physics, we will need to scale systems up, which is what this invention allows for. To build a quantum computer or quantum internet, you don’t just need one photon at a time, you need lots of photons simultaneously that you can connect to each another,” explains Midolo.

The researchers point out that to build a quantum computer or a quantum internet, many nanomechanical routers must be integrated in the same chips. About 50 photons are required to have enough power for achieving what is known as “quantum supremacy”. According to Midolo, the new nanomechanical router makes doing so a realistic goal:

“We have calculated that our nanomechanical router can already be scaled up to ten photons, and with further enhancements, it should be able to achieve the 50 photons needed to reach ‘quantum supremacy’.”

The invention is also a major leap forward in controlling light in a chip. Existing technology allows for only a few routers to be integrated on a single chip due to the large device footprint. Nanomechanical routers are so small that several thousand can be integrated in the same chip.

“Our component is extremely efficient. It is all about being able to emit as many photons at once, without losing any of them. No other current technique allows for this,” says Midolo.