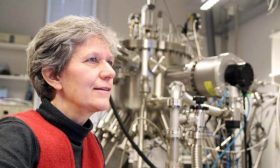 However she adds: “Glass fibres are good up to a wavelength of about 3 microns. Any more than that, and they’re not so good.” This limitation is sometimes problematic. Optical communications typically use the near infrared part of the wave spectrum because this range exhibits the lowest loss of energy when the signals pass through glass.

But, Gibson contends, “if we could utilise even longer wavelengths, the benefits would include better medical diagnoses and more precise environmental monitoring of airborne gas particles. Longer wavelengths could also mean more space for media channels, since the competition is fierce for the wavelengths where free space transmission normally takes place now.”

Of course, optical glass fibres are not made of pure glass, but require a core doped by some other materials to enable efficient transmission of signals. This construction is also quite complicated to achieve efficiently, although the production methods have gradually been perfected over the past 50 years.

At NTNU, various research groups have been experimenting with optical fibres featuring a semiconductor core of silicon (Si) and gallium antimonide (GaSb) instead of small amounts of germanium oxide, which is often used in modern silica fibres. Some of the researchers’ latest research findings have just been presented in Nature Communications.

Ph.D. candidate Seunghan Song is the first author of this article, which “describes a method for making optical fibres where part of the core that is gallium antimonide, which can emit infrared light. Then the fibre is laser treated to concentrate the antimonide,” says Gibson. The process is carried at room temperature. The laser processing affects the properties of the core.


Silicon is established as the most commonly used material in solar panels. Along with oxygen, silicon is also the most common material in glass and glass fibre cables. Gallium antimonide is less typical, although others have also used the same composition in optical instruments. But not in the same way.

With the new method, the gallium antimonide is initially distributed throughout the silicon. This is a simpler and cheaper method than others to grow crystals, and the technology offers many possible applications.

“Our results are first and foremost a step towards opening up larger portion of the electromagnetic wave spectrum for optical fibre transmission,” Gibson says. “Learning about the fundamental properties of the semiconductor materials in glass fibres allows us to make more efficient use of rare resources like gallium.”