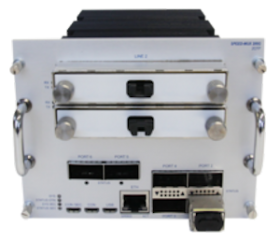 German fibre and copper connectivity solutions specialist Pan Dacom Direkt has announced the general release of the latest variant of the SPEED-MUX family. The SPEED-MUX-200G-CFP2 is equipped with 1xCFP2 slot for transmission of 200 Gbps via one DWDM-wavelength

The new muxponder is a compact 200 Gbps multi-protocol multiplexer card. It is equipped with 6 QSFP + or 6 QSFP28 slots on the client side and, says the vendor, can meet a multitude of different customer requirements.

With the SPEED-MUX 200G 2CFP, direct aggregation of 1/10/25/40/100 Gigabit Ethernet, 4/8/16/32 Gigabit Fiber Channel, 5/10/14/25G InfiniBand, and OTU-2 is possible. With the relevant CFP line transceivers, either two 100G OTU-4 services will be transmitted via one 50 GHz DWDM wavelength each or, when using CFP2 optics, full 200G via a single lambda. Accordingly, up to 96 DWDM wavelengths can be bundled for a transmission capacity of up to 9.6 Tbps, respective to 19.2 Tbps over a single fibre pair. With the integrated AES 256 Layer-1 encryption method, a hardware-based encryption with the lowest latency and full data throughput is used, which enables transmission of data according to very high security standards.

The SPEED-MUX-200G-2CFP can be also used as a dual 100G transponder card with the use of QSFP28 transceivers. This is designed to ensure investment protection for the user as part of future network expansions (the pay as you grow concept). Further, the 2CFP-variant enables the user to build up a smart back-up scenario by routing a second 100G data stream via a redundant fibre path.

The new SPEED-MUX has already been installed in different mission critical applications in Germany elsewhere. It is being promoted as a solution for DataCentre Interconnect applications, and as a good fit for organisations which have a shortage in lambdas as well as for those who plan to migrate from 10 Gbps to higher data rates.

A further variant, which could be housed in a 1 U-chassis, is under development and will be available soon.