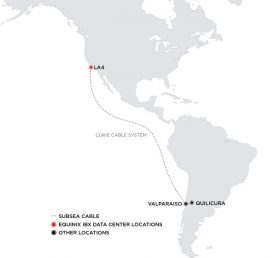 Google has landed its 10,000km four-fibre pair Curie submarine cable from Los Angeles to Valparaíso, Chile. The cable will aid speedier and more efficient data services between the US and Latin America and support Google’s own growth plans across the region.

The Valparaíso landing station will be linked to the Google data centre located at Quilicura, near the capital Santiago, which was officially opened last year. It is the first new submarine cable to land in Chile for around 20 years, with Valparaíso connected to one of Equinix’s data centres in Los Angeles.

Chilean minister of transport and telecommunications Gloria Hutt said: “The arrival of Curie marks a new milestone in the technological development of Chile and demonstrates the commitment of our country to be pioneers in the digital revolution we are experiencing. Enabling this great infrastructure will provide advantages and opportunities for millions of internet users in Chile and across the region.”

Google says the cable project is part of a $47bn investment it earmarked for a variety of connectivity and infrastructure projects it completed or started between 2016 and 2018 globally, including a number of other submarine cables to serve various world markets.

Chile is considering getting behind another submarine cable connection between the country and China in a project that could involve Huawei. Huawei is already linking the south of the country with the north as part of a different fibre connectivity project.

Jim Poole, vice president for business development at Equinix, said of Curie: “With the significant increase in global data traffic, we see corporations running global businesses demanding access to high-capacity, low-latency networks capable of connecting them to data centres across oceans with stringent levels of reliability, which is what Curie helps deliver.”