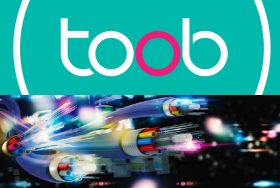 • Toob to roll out gigabit-capable, fibre network to more than 100,000 premises by the end of 2021
• Backed by Amber Infrastructure with £75 million of initial funding
• Experienced management team strengthened by appointment of Charles McGregor as Chairman

UK-based Toob, a full fibre broadband provider, says it will deliver gigabit broadband speeds to more than 100,000 premises by the end of 2021, with an ambition to expand its full fibre network to pass more than one million homes and business premises over the next ten years.

Toob, which is based in Portsmouth, has secured a £75 million funding package from Amber Infrastructure Group’s National Digital Infrastructure Fund. NDIF’s majority investment will support Toob’s build out of a gigabit-capable fibre network, which will benefit consumers, businesses and public services in towns and cities across the UK.

The company was founded and is led by Nick Parbutt (CEO) and Mike Banwell (CFO), former Directors at Vodafone UK. The highly experienced management team will be strengthened with the appointment of Charles McGregor who has joined as Chairman. Charles brings extensive experience of fibre and successfully growing businesses, having recently served as the Chairman of Gigaclear for five years. He was previously the founder and CEO of Fibernet.

Toob will deploy the latest fibre technology over existing infrastructure as often as it can to increase the speed of its roll out and reduce community disruption. The company said it “expects to be a major customer of Openreach’s improved ducts and pole access product,” which becomes fully available at the beginning of April this year.

Nick Parbutt, CEO, commented, “We are delighted to be partnering with Amber Infrastructure and to have secured Charles as Chairman. Toob now has the right people, the right plan and the right funding in place to capitalise on the exciting opportunity ahead of us. We want to enable families, businesses and communities to live, work and play in ways which are only made possible with the advent of gigabit broadband.”
Charles McGregor, Chairman, said: “I’m excited to be joining Toob. I have been involved in fibre businesses for over 30 years and I believe that Nick and his team will deliver on the exciting strategy announced today.”

Jonathan Oxley, Ofcom’s Competition Group Director, commented, “The amount of internet data used by people in the UK is growing by around half every year. So we’ll increasingly need full-fibre broadband services like this to provide faster, more reliable connections and capacity to our homes and offices. These plans are another example of full-fibre being used to build broadband that can support the UK’s digital future.”

Matthew Vickerstaff, Interim Chief Executive Officer, Infrastructure and Projects Authority, said, “This investment shows how the National Digital Infrastructure Fund continues to help companies improve broadband speeds across cities and towns in the UK, by increasing their access to private finance. Upgrading our digital infrastructure to be reliable, sustainable and resilient is key to meeting the needs of an increasingly digital world, and increasing our productivity.”