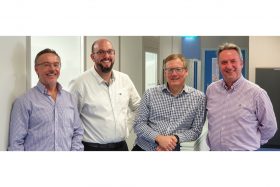 UK-based Optoscribe Ltd, which uses laser direct write technology to manufacture glass-based integrated 3D photonic components for the telecommunications and data communications markets, has announced the release of its 3rd generation ultra-high-speed 3D photonic component manufacturing system and the expansion of its cleanroom within its state-of-the-art facility in Livingston, UK.

The company, which claims to be a world-leader in the delivery of high-volume laser-based manufacturing of 3D photonic integrated circuits, has also increased its headcount by 50% over the past 18 months, having recruited key skills in areas including photonic engineering, product development, and manufacturing.

Nick Psaila CEO (second from left in photograph) said, “Following our last investment round in September 2018, I am delighted to see the continued improvements of our 3D laser inscription technology. This significant milestone represents the completion of a commitment we made to our investors and our customers to further expand our capability to support increased production volumes going forward. This progress is particularly timely with our ever-increasing levels of commercial engagement in datacentre photonics and other markets.”