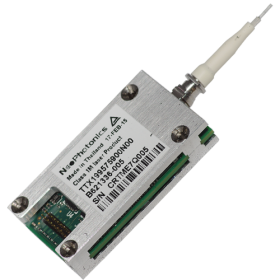 The Nano-ITLA utilises an ASIC control IC that reduces the size of required electronic control circuitry. The Nano-ITLA is well suited for use in 400ZR small form factor pluggable coherent modules, including OSFP and QSFP-DD, and for compact daughter cards for 600G and 1.2T applications.

Coherent communication is moving simultaneously to higher data rates per wavelength and to smaller form factors, requiring higher performance from the optical components at the same time that the size and power must be significantly reduced.  Increasing the symbol rate to 64 Gbaud and using higher order modulation, such as 16 QAM to 64 QAM, can increase the data rate per wavelength to 400G or 600G.  However, such higher order modulation schemes are more sensitive to both amplitude and phase noise since the separation between states is necessarily reduced.  As a result, this situation requires the most stable, ultra-narrow linewidth laser sources.   The new Nano-ITLA uses a miniaturised design while maintaining the performance of an external cavity design, which results in high output power, low electrical power consumption and the narrowest linewidth in the industry – resulting in high fidelity in higher order modulation formats.

“We are pleased to begin commercial shipments of our new ultra-compact Nano-ITLA and to provide our customers with the components to enable the next generation of 400G and 600G compact optical modules.  This Nano-ITLA delivers similar performance advantages to our current Micro-ITLA, but with the laser size reduced by half,” said Tim Jenks, chairman and CEO of NeoPhotonics. “At OFC we will also be demonstrating our next generation Pico Tunable Laser, which is based on Silicon Photonics and designed for further integration,” concluded Mr. Jenks.

NeoPhotonics is exhibiting its suite of coherent components for 600G to a Terabit at OFC in Booth 2923, March 5th to 7th, along with its broad family of products for high speed applications. NeoPhotonics has also announced the general availability of its new ultra-compact FVOA-9000 MEMs-based Variable Optical Attenuator.