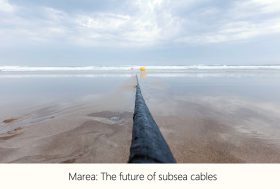 New research with lasers could enable service providers to push even more data through Transatlantic and other undersea optical cables to help meet the booming demand for transmission between North America and Europe. A method – based on using 16QAM modulation – could, say the researchers, even increase network capacity without requiring new ocean cables, which typically cost hundreds of millions of dollars to manufacture and install.

A research team from Infinera has set a new efficiency standard for transatlantic fiber optic cables. Testing 16QAM modulation – the new approach to transmitting light signals — the group not only shattered efficiency records for data transfer. They nearly doubled data capacity and approached the assumed upper limit for this type of transmission.

The need for new and better optical fiber and fiber optic cables has constantly grown since the first undersea trans-Atlantic cable was installed back in 1858.  Because of the move to cloud-based computing, that demand has skyrocketed over the past decade. 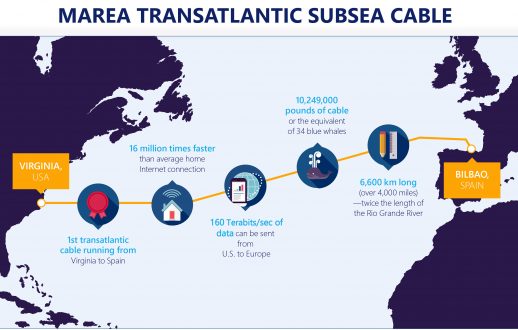 The researchers say that it is important to note that while this was the first time that PM-16QAM signals were sent over this distance, the team combined equipment readily available to the industry with high-speed lasers to make the transmission. The team generated signal speeds reaching 26.2 terabits per second, a 20 percent increase over what cable developers believed was possible.

This experiment delivered results much the same as next-generation chip sets from other vendors that use a different technique called probabilistic constellation shaping (PCS). According to the research team, the good news for service providers is that the new technique can be combined with PCS for even faster speeds in the future.

The group presented their research results to the industry, analysts and media at last months OFC 2019 exhibition and conference in San Diego, Ca, US.