Modulation
For all optical transceivers transmitting up to 100Gbps, a NRZ mechanism (binary non-return to zero) is used. In practical, we can transmit 1 bit per waveform (0 or I).

With PAM4 modulation (pulse amplitude modulation), each waveform can carry 2 bits (instead of 1 for NRZ). To achieve that, the waveform has 4 different levels, carrying 2 bits: 00, 01, 10 or 11.

The baudrate wording has not been used in optical transmission until now because there is an equivalence between baudrate and bitrate for NRZ transmission. A baud is the unit representing the symbol rate and is becoming significantly important for 400G transmission.

A transmission with NRZ mechanism will have the same baudrate and bitrate because one symbol can carry one bit. 25Gbps (gigabit per second) bitrate is equivalent to 25GBdps (gigabaud per second) baudrate.

Because PAM4 is carrying 2 bits per symbol, it is important to make a difference between baud rate and bitrate: 50Gbps PAM4 (50 gigabit per second with PAM4 modulation) will have a line transmission at 25GBdps (Gigabaud per second). It means that for 50Gbps PAM4, the symbol rate remains to 25 Gigabaud.

The gearbox is not a new concept but is now getting a real importance for the 400G applications: 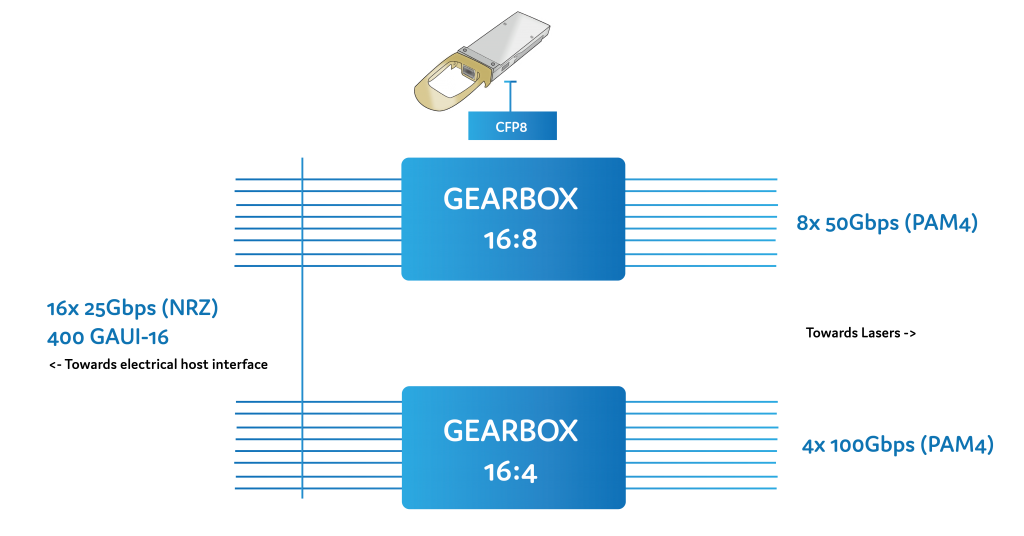 The gearbox presence can be easily identified following the optical standard: a QSFP56-DD 400GBASE-LR8 doesn’t have a gearbox while the 400GBASE-LR4 does.In the most recent designs, the gearbox is embedded into a DSP IC (Digital Signal Processor, Integrated Circuit) which can have additional functionalities, such as equalization, retiming, etc.

The signal integrity is becoming extremely challenging when transmitting at 100Gbps PAM4 per lane; considerably reducing the maximum optical reach.

While 400GBASE-LR8 (8x 50Gbps PAM4) is now mature, the 400GBASE-LR4 (4x 100Gbps PAM4) is clearly on the edge and doesn’t have any margin left. A strong FEC mechanism will be required to bring the communication at a correct BER for a regular 400G connection. 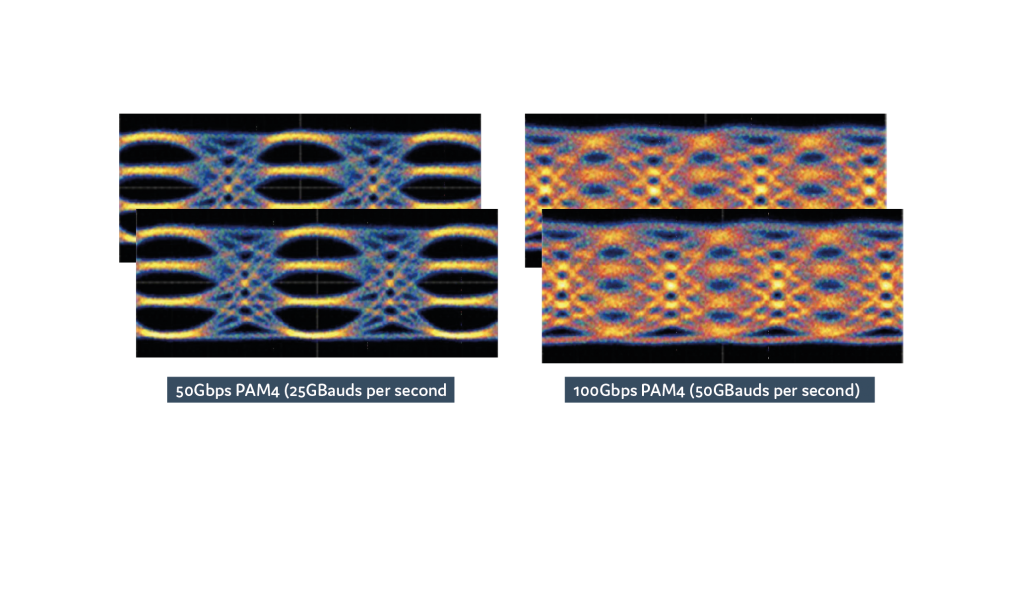 The right technology must be chosen following the needs and application. 4x100Gbps transmission is interesting as it only uses 4 lasers instead of 8. It lowers the power consumption, reduce the hardware complexity and relax the requirement on xWDM grid; however, it requires a gearbox and it’s clearly bringing a challenge in term of reach.

If the gearbox cost is dropping down in the future, the 4x100Gbps seems more interesting for the datacentres, clearly for 2 different applications:
• A breakout solution from a single 4x100Gbps QSFP-DD (400GBASE-DR4, with MPO connector) to 4x QSFP28 100GBASE-FR (with LC connector); used in server-leaf architecture.
• A cost-efficient module for a max 2km reach over duplex singlemode fibres (400GBASE-FR4); used in leaf-spine architecture.

For link with a reach of maximum 10km, 400GBASE-LR8 is available and ratified under IEEE 802.3bs. The 400GBASE-LR4 is not ratified by the IEEE committee yet.

This article was written
by Ambroise Thirion