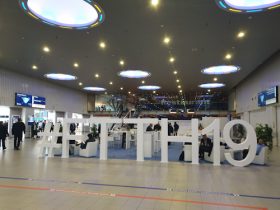 FTTH/B is growing fast in Europe, according to the latest Market Panorama and forecast data prepared by IDATE for the FTTH Conference 2019. The report reveals that by September 2018, there were more than 59.6 million FTTH/B subscribers in the European region, an increase of 21%, with overall coverage reaching 36.4%. While Italy has the higher growth in homes passed at 43.1%, for the first time, the UK entered the ranking.

In addition, the deployment of both FTTH and FTTB networks has increased significantly, according to IDATE. It found that by September 2018 the estimated coverage2 of FTTH/B reached 46.4% in the 39 group and 36.4% in EU282, which does not include countries such as Russia. This, says IDATE, shows a clear upward trend from September 2015 where the estimated coverage rate was 39% in the EU39 and 27.2% in the EU28.

Fibre technologies have evolved in recent years and by September 2018, there was a predominance of FTTH architecture over FTTB (56% vs 44%). In the European region, alternative players were the most involved in FTTH/B expansion, with a contribution of around 55% from the total FTTH/B players. Also, governments and local authorities are getting more involved in fibre projects, either directly, by signing agreements with telecom players, or via public funds. The report says it is also worth noting that incumbents in some countries have started to modify their strategy in order to deploy FTTH solutions, instead of continuing the development of legacy copper-based or cable-based networks. 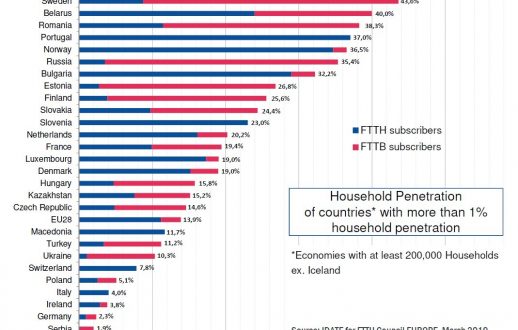 Commenting on the report, Ronan Kelly, President of the FTTH Council said, “These new figures show a momentum that is accelerating over the last few years. Full fibre is the way forward and the results of the Market Panorama provide compelling evidence of this. Fibre expansion is booming in many countries and today more consumers are aware of the benefits of fibre. Our job is not done, however, there is still a long way to go until every citizen and business has access to the benefits of full fibre in Europe.”

This year, the United Kingdom enters the global ranking for the first time, reaching a modest penetration rate of 1.3% and a take-up rate of 13.1%. FTTH/B subscriptions grew by 83% compared to September 2017 for a total of 369,250 subscribers, and FTTH/B homes passed rose to 22.8% reaching 2,817,000, although these figures are from a very low base.

UK regulator, Ofcom has played a major role in promoting investments in FTTH/B across the country. After reducing the prices of wholesale services from Openreach to encourage investments and competition in the market, Ofcom set out a plan to support full-fibre investment in July 2018. The plan follows the direction set in Ofcom’s 2016 Strategic Review of Digital Communications which is aimed at supporting the UK government’s ambition of 15 million homes to have access to full-fibre broadband by 2025.

While welcoming the initiative, some independent providers in the UK believe Ofcom’s strategy needs some refinement.  Evan Wienburg, CEO of TrueSpeed, a full-fibre provider in the largely rural South West of England says, “The UK’s entry into the FTTH Council’s EU Global ranking for the first time is great news – and a definite step in the right direction towards the government’s vision of achieving full fibre connectivity across the whole of Britain by 2033. In particular, it is a testament to the hard work being undertaken by a raft of smaller, independent providers who, like TrueSpeed, are laying the foundations for our digital future by deploying built-to-last full fibre networks across the country. But more needs to be done. Only by reducing the focus on FTTC and accelerating the pace of full fibre network builds across all infrastructure providers can the UK move up the EU rankings and deliver on the promise of a world-class digital infrastructure.”