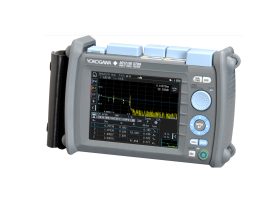 Yokogawa has released its new AQ1210 Optical-Time Domain Reflectometer (OTDR) which, while resembling the existing AQ1200 in appearance, has been internally re-engineered to bring the features of the company’s AQ7280 flagship OTDR to installers and testers of PON and FTTA.

The AQ1210 uses an optimised operating system, which, in conjunction with the 5.7-inch capacitive multi-touch screen display and built-in smart mapper, enables the operator to rapidly characterise fibres in ranges from 200 metres to 256 km and generate easy-to-read pdf reports with icons clearly highlighting events.

PON is typically used throughout the world to provide optical fibre-based services to domestic and commercial customers. With 6 models offering 2 or 3 wavelengths, and the ability to test live fibre networks with high-port count splitters (up to 1:128), every user can find an AQ1210 model with the combination of wavelengths required to meet the testing needs of their local country or region.

“As more and more optical networks are installed to satisfy the demand for reliable and fast internet services, there is an increasing demand for choice in the selection of cost-effective and multi-capable test equipment,” says Terry Marrinan, vice president Europe, ASEAN & Oceania, for Yokogawa’s Test & Measurement Business Unit. “With the introduction of the AQ1210 we are fulfilling our commitment to provide, since our very first model launched in 1981, a complete range of OTDRs able to measure fibres from the Local Area Networks to the ultra-long-haul backbone lines.”

Measuring 210 x 148 x 69 mm and weighing 1kg, the AQ1210 can be operated using the touch screen or adjacent hardware keys. It is therefore compact and lightweight enough to be easily handled while testing the so called “last mile” of fibre to the consumers’ premises and also rugged enough to be used in more demanding and hostile environments where low temperatures, for example, affect touch screen operation.