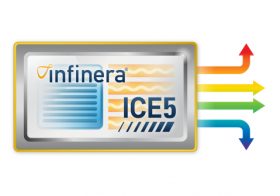 Telstra is one of the largest providers of 100 Gigabit per second (Gb/s) network services globally and the ICE4 technology positions the company to support customers’ future connectivity demands, activating capacity per wavelength of up to 200 Gb/s.

Telstra’s network planning principal, Andy Lumsden, said that Telstra was committed to continually developing its network to support the increasing demand for data right across the Asia Pacific region. “Our commitment to our Asia Pacific customers means we are always adapting and creating capacity where it is needed. This means we are continually working to deploy new technologies that enhance our existing network and complement our latest capacity investments,” Lumsden said.

“With Infinera’s ICE4 optical engine, we are deploying the latest technology across our network. We can now provision new services faster than ever before, which is critical in a region when capacity demand on our international networks has almost doubled over the past two years.”

Telstra has the largest subsea cable network in the Asia Pacific, reaching more than 400,000km and enough to circle the world almost 10 times. Infinera’s vice president of sales, Andrew Bond-Webster, said early testing on the rollout had delivered strong results. “ICE4, our latest optical engine, enables Telstra to deliver multi-terabit capacity cost effectively with low power consumption and with the reliability required for subsea networks to perform,” Bond-Webster said. It is expected that Telstra’s ICE4 network upgrade will be completed in the coming months.