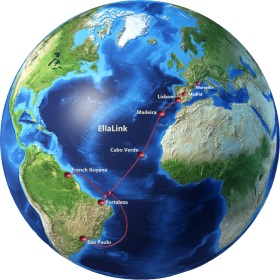 EllaLink Ireland Ltd and Alcatel Submarine Networks (ASN) have announced that they have started construction of the EllaLink Submarine Cable System. Scheduled for operation in 2020, the EllaLink system is a four-fibre pair submarine system designed to satisfy the demand for traffic between Europe and Latin America. Linking datacentres in Madrid, Lisbon, Marseille, Fortaleza and São Paulo, EllaLink will provide express subsea connectivity, and offer the first ever direct fibre pair between the two continents.

According to its operator, the EllaLink system is being built with state-of-the-art coherent technology initially offering 72 Tbps of capacity. Landing sites in Praia Grande (Brazil), Fortaleza (Brazil) and Sines (Portugal) have been secured,

“It gives me great pleasure to announce this significant milestone for EllaLink. Since the initial idea in 2010, interest in the route has grown significantly. Together with our financial sponsor Marguerite II and key anchor tenants the EllaLink team has worked alongside ASN to design a high capacity system on the most optimum marine route,” noted Alfonso Gajate, chairman of the EllaLink Board. “Many people have contributed towards making this system real, my sincere thanks go to each of them.”

“The start of the construction of the EllaLink system is a significant achievement in the expansion of the submarine infrastructure between Latin America and Europe,” said ASN president and CEO Philippe Piron. “Once deployed, it will contribute to enhance trans-continental connectivity, for the benefit of the global consumer and business communities between the two continents.”