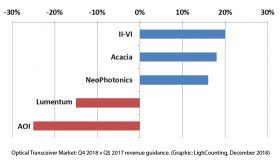 According to LightCounting’s latest assessment of the global optical transceiver market, its Quarterly Market Update Report, released in mid-December, 2018, the sector achieved “respectable year-over-year growth of +8% in the third quarter of the year despite headwinds faced by several vendors.”

The analyst described the mixed performances of the optical transceiver sector as a “ying and yang market dynamic”, which it said was also present in recently-published company guidance for the fourth financial quarter of 2018: “Company comments ranged from strong growth to seriously disappointing,” said LightCounting

In particular, II-VI continues to benefit from strong demand for ROADMs and 980nm pump lasers, and it recently gave guidance of 20% y-o-y growth.  Acacia and Neophotonics guided for “mid-teens percentage” growth in sales on the back of new CFP2 and 600G products (Acacia); and increased sales to in-the-news Huawei (NeoPhotonics).

LightCounting continued that Lumentum had guided for 14% growth, but had to revise that to minus 15% after “a large consumer electronics customer” (meaning Apple) had called to say it would not require nearly so many VCSEL arrays in 4Q as it [Apple] had first thought.  The report also states that: “AOI is still struggling with a quality issue that is limiting its ability to ship everything customers want.”

The fundamental drivers of growth in the optical components datacenter segment remain strong.  Internet Content Providers (ICPs) spent 66% more on property plant and equipment in the first three quarters of 2018 than in the same period in 2017. Datacenter storage, server, and switch makers benefited from this largess, growing sales 14% year-over-year through September, despite the continuing migration towards open systems and white box manufacturing.

While sales for datacom equipment vendors as a group were down 3% sequentially in the third quarter of 2018, seven – Arista, Dell, Extreme, Inspur, Lenovo, Mellanox, and NetApp – reported double digit sales growth compared to 3Q17. Sequential growth was more mixed, indicating that although ICPs are spending at a new higher level in 2018, they are not increasing spending through the year.

Communications Service Providers held capital expenditures flat in the first three quarters of 2018, on a year-over-year basis. While commercial 5G services were launched in September 2018 by Verizon, its four-city rollout and other operators’ equally small initial deployments are not yet of a scale to require an appreciable increase in capex. China’s 5G rollout is about a year behind Verizon’s.

Publicly reported sales figures from telecom equipment makers were down 2% year-over-year through September 2018, in part because of ZTE’s forced shutdown in 2Q18. Like the optical component market, though, the average belies a wide range of performance. Ciena and Infinera both reported double-digit y-o-y sales growth for 2018 through the end of September, while ZTE was down 20%, and Ericsson and Fujitsu sales were also lower this year compared to 2017.

The outlook for 2019 is for continued growth with the occasional pothole.  LightCounting commented that its recent 5-year market forecast calls for double-digit growth in revenues for the ethernet, WDM, and wireless transceiver segments, as well as in active optical cables.  The need for speed continues to drive adoption of higher priced modules in all three segments. Products expected to have particularly strong growth in 2019 include 100GbE Ethernet transceivers in several flavours, 200G DWDM (CFP2 ACO, CFP2 DCO), and 25G SFPs for 5G fronthaul.

The analyst commented, “Near term, the biggest threat to 2019 market growth is the deteriorating U.S.– China trade relationship, strained to the breaking point by the recent arrest of Huawei’s CFO. If Huawei gets hit with a sales ban like ZTE, the impact could be as bad or even worse than ZTE’s problems. More generally, trade tariffs or just the threat of tariffs could disrupt existing supply chain relationships, as companies move manufacturing or change suppliers from one country to another to eliminate tariff costs. Our forecast assumes the industry is able to weather this storm without suffering a significant impact, but we also know some potholes are unavoidable, despite our best intentions.”