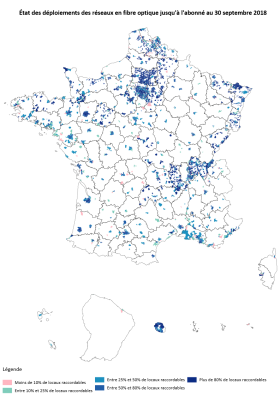 As of Q3 2018 the total number of high-speed and very-high-speed Internet subscriptions on French fixed networks reached 28.9 million, a net growth of 245,000 accesses during the quarter. Over one year, the net increase amounts to 715,000 (plus 2.5%).

ARCEP notes that while the annual decline in the number of legacy broadband subscriptions (20.6 million) continues to increase (minus 1.2 million in one year to Q3 2018 against 670 000 a year ago), growth in the number of very high speed broadband subscriptions ((maximum upload speed greater than or equal to 30 Mbits/s) is growing uninterruptedly: 1.9 million additional accesses over the last twelve months, compared to an additional1.4 million up to the third quarter end of 2017, bringing the number of active subscriptions to 8.4 million at the end of September 2018. Most of the growth came from the increase in the number of end-to-end fibre optic subscriptions, which increased by 380,000 over the previous quarter, contributing to 75% of the total increase in ultra-fast broadband. As of September 30, 2018, the number of end-to-end fibre optic accesses reached 4.3 million lines, or plus 1.4 million in a year. FTTH/P now accounts for nearly 15% of the French total broadband technology mix.

In all, the number of very high speed subscriptions represents 43% of the number of premises eligible for very high speed connectivity, growing by 5 points in one year. ARCEP also reports that over the last four quarters, an additional 2,988,000 premises have been made connectable to FTTH, including 752,000 in Q3 2018. As of September 30, 2018, 12.5 million premises were eligible for FTTH offers, an increase of 31% in one year.