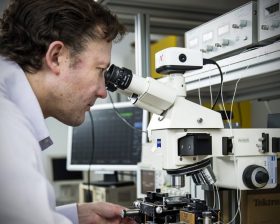 Internet traffic has risen a thousand-fold since 2000 and currently accounts for around 10 per cent of the world’s electricity consumption. This is a trend that is set to increase. There is therefore a great need for new infrastructure offering energy-efficient broadband solutions, and a new Grand Solutions project with funding from Innovation Fund Denmark now aims to consolidate Denmark’s leading position in this field.

“This is an exciting project, as it is crucial that we make the digital infrastructure more energy efficient,” commented the Danish minister for higher education and science, Tommy Ahlers.

“The development project will also investigate and implement simple new energy-efficient and scalable end-to-end security schemes across the IoT infrastructure,” said Associate Professor Martijn Heck from the Department of Engineering at Aarhus University.

With the growth of the Internet of Things, Industry 4.0 and the rapidly growing number of online applications such as medical diagnostics, self-driving vehicles and cloud services, internet traffic—and hence the huge energy consumption required to drive it—will only continue upwards.

The IoT component is growing by over 30 per cent annually, and more than 20 billion devices are expected to be connected in 2020, say the Danish network development team. In their announcement they stated, “All this communication also takes place via the internet. This growth also requires massive amounts of energy, and we will soon run out of space on the infrastructure and security is an increasingly important focus area. New technology is therefore essential.”

The new three-year, DKK 100 million (US$ 15 million) Grand Solutions project, which is receiving DKK 60 million from Innovation Fund Denmark, is bringing together DTU, Aarhus University, and twelve Danish companies. The project is called INCOM, and aims to create new solutions for the next generation of communications infrastructure. The project also involves more than 15 associate partners, most of which come from the industry.

“Probably very few people realise that all the wireless connections we use so much today are only wireless for the first short segment. The traffic is then carried in optical cable connections across countries and oceans. This is where INCOM comes in, because the world has an urgent need to make these connections more powerful and greener,” commented Professor Leif Katsuo Oxenløwe from DTU Fotonik, the man who conceived the new Innovation Fund Denmark project.

The hubs of the information age are data centres, connected by intercontinental optical cables that transmit information from machine to machine and person to person at high speed. In just 30 years, half of the world’s population has been connected to the Internet.

However, this advance has not come without a huge energy bill. Global communications consume so much energy that they account for more than 2 per cent of all man-made CO2 emissions, and data traffic is rising by about 25 per cent annually. The key requirements for the new infrastructure are therefore to provide much greater capacity with significantly lower energy consumption. Greater reliability, minimal delays, and better security are also important.

INCOM is being designed to make it possible to reduce the number of light sources driving the Internet by refining a ‘frequency comb’, allowing a single laser to replace hundreds. This will lead to major power savings across the entire network and in the data centres, while also allowing higher data speeds of more than 400 Ggps. INCOM is also working to integrate light circuits on a chip, significantly reducing the cost and power consumption, as this allows much of the signal processing which is currently done electronically to be done directly in the optical domain. The energy consumed to convert between light and electricity will be completely removed.

“Over the last few years we have established Aarhus University as a centre for photonic integration that connects Danish end users with European tech platforms. Together with our project partners, we will bring this technology closer to the market. The INCOM project will also investigate and implement simple new energy-efficient and scalable end-to-end security schemes across the IoT infrastructure,” says Associate Professor Martijn Heck from the Department of Engineering at Aarhus University.