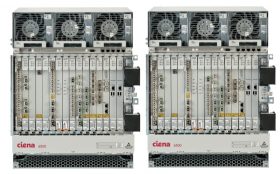 Headline statements include: total annual sales of US$3.1 billion (compared with US$2.8 billion for2017); Q4 Revenue of US$899.4 million (up 21% year over year); Q4 net Income per share of US$0.53 adjusted (non-GAAP); and the company also announced a share repurchase program meaning approximately 1.3 million shares of common stock were acquired for an aggregate price of US$36.2 million during the quarter.

“We achieved outstanding financial results in our fourth quarter and fiscal 2018 due to continued execution of our proven strategy,” said Gary Smith, Ciena’s president and CEO. “The combination of our innovation strength, successful interception of market trends and sustained ability to take share and outperform the market, along with a thriving industry environment, gives us tremendous confidence in both the near and longer term outlook for our business.”

During fiscal year 2018, Ciena repurchased approximately 4.3 million shares of its common stock at an average price of US$25.86 per share for an aggregate purchase price of US$111.0 million.

Highlighting its ongoing commitment to returning capital to shareholders, Ciena also announced that its Board of Directors has authorised a new program to repurchase up to US$500 million of its common stock, replacing the previous targeted repurchase plan.