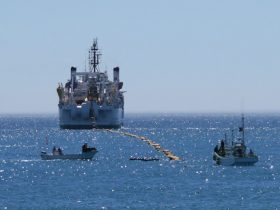 Acacia Communications has announced the first 400G single carrier DWDM transmission on the 6,600 km Marea submarine cable between Virginia Beach, USA, and Bilbao, Spain. The field demonstration was conducted by Acacia in collaboration with Microsoft and Facebook, and helped to demonstrate that improvements in capacity and spectral efficiency can enable increased utilisation of deployed fibre and improved network capacity.

The growth of cloud and internet services are driving the need for increasing subsea network capacity.  Meeting these demands requires advanced coherent transmission systems that support higher data rates that weren’t possible in prior transatlantic systems. The Marea submarine cable, a joint project between Microsoft, Facebook, and global telecommunications infrastructure company Telxius, features an “open” design that allows it to evolve with technology and enables adoption of new technologies, such as the Acacia AC1200 coherent module.

“Transmission of 400G over 6,600 km is a significant milestone and demonstrates what can be achieved with higher performance transmission optics combined with a well-designed line system,” said Mark Filer, principle optical engineer, Azure Networking, Microsoft. “This field demonstration of an advanced solution that is just becoming commercially available highlights the value of Marea’s open architecture to evolve with the latest technology. By allowing early adoption of new technologies such as Acacia’s AC1200, we are able to increase the utilisation of our deployed fibre, maximise our investment and improve network capacity.”

“We are excited to have completed this field demonstration on the Marea cable, with the first transmission of 400G on a single carrier, highlighting the performance and features of our AC1200 coherent module,” said Christian Rasmussen, founder and vice president of Digital Signal Processing and Optics at Acacia Communications, “We believe the benefits of our AC1200 module will help network operators improve their network utilisation in a range of applications from edge DCI to submarine.”