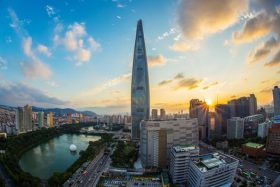 That is where Gfast comes in. Gfast is the standards-based access network technology that adds gigabit connections to each unit in the building by using the existing twisted pair telephone wiring. Sckipio develops standards-compliant Gfast modems used to enable ultra-broadband access and mobile backhaul. It partners with more than 30 companies globally on Gfast and is a contributor to ITU standards.

“SK Broadband is determined to provide gigabit internet to all, but not all South Korean apartments can be easily wired with fibre all the way to the apartment,” said Choong-Bok Lee, the manager in charge of access networks at SK Broadband. “That’s why we chose Sckipio’s Gfast. It’s the best way to extend gigabit fibre performance to these apartments over existing twisted pair telephone wires.”