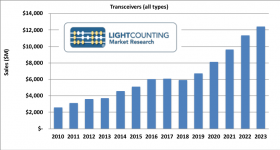 According to its latest global forecast for optical components and modules, LightCounting expects that sales of 200 GbE, 2×200 GbE and 400 GbE optics will expand the cloud/datacentre market segment from $2.3 billion in 2018 to more than $6.8 billion in 2023. The company also believes the cloud pulled the optical transceiver market out of a ditch last year, and it is projected to limit the optical transceiver market’s decline in 2018 to less than 3%.

The analyst firm had projected slightly higher sales of optics to the cloud in 2018, but rapid price declines of 40 GbE and 100 GbE transceivers limited sales growth. Google started deployments of 2×200 GbE optical transceivers in 2018 and its plans for next year are consistent with LightCounting’s forecast. Other cloud companies are exploring options of either staying with 100 GbE for another two-to-three years, or of possibly using 200 GbE or 400 GbE in a breakout configuration to maximise switch radix.

The decline in sales of telecom optical components and modules in 2017-2018 was mostly due to weaker than expected sales of optics to Huawei and ZTE. Suppliers of optical components and modules first reported sharp drops in sales to these customers in March of 2017 which was related to excess inventory accumulated by Huawei and ZTE in 2016. Most of the excess inventory was depleted by the end of 2017, but suppliers continue to report slower than expected business with these Chinese customers. The April 2018 ban on sales of US-made products to ZTE added more confusion to the market and reduced the annual sales of optics to ZTE by 20% to 30%. Numerous projects were delayed in 2018, not just in China, but worldwide because of the ZTE ban and because of uncertainty related to China-US trade war.

LightCounting believes the DWDM module market has room to grow. It expects that 130,000 coherent modules will be shipped in 2019, but the total number of coherent 100/200/400G ports will reach 710,000. This means that 82% of the ports will be built by system vendors (like Ciena or Huawei) and only 18% of the ports will use transponder modules made by companies like Acacia or Oclaro. Converting this to sales opportunity, the market for coherent modules is projected to reach $680 million in 2019, but it would have reached $3,750 million if all coherent ports used transponder modules. The company predicts that market share of coherent transponders will increase from 18% in 2019 to about 35% in 2023.

The company also reckons that there are signs that a new cycle of DWDM system upgrades is starting now. Suppliers are reporting strong sales of pump lasers for applications in fibre amplifiers since the second half of 2017. Sales of WSS modules used in ROADMs are up sharply in 2018. All these products are usually deployed in the early stages of upgrade cycles and these should be followed by a pick-up in sales of DWDM transponders and line cards. LightCounting’s conclusion: this is very likely to happen in 2019.
https://www.lightcounting.com/