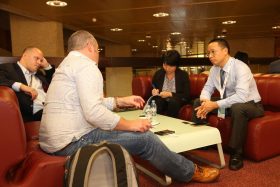 Huawei officially released a 600G optical network solution at this month’s Ultra-Broadband Forum (UBBF 2018) in Geneva. Based on Huawei’s latest OptiXtreme oDSP chips, the solution provides an adjustable single-wavelength rate of up to 600G and a single-fiber capacity of 40T.

Huawei said the solution had been introduced to accommodate the demands cloud computing, big data, AI and 5G technologies are and will be putting on telcos’ networks. The vendor said telcos were demanding ultra-high-speed transmission networks that minimise TCO and per-bit transmission costs.

The technology features a spectral efficiency of 8 bit/s/Hz, “50% higher than current single-wavelength 400G technology”, said the firm. The single-wavelength rate is adjustable from 100G up to 600G, to “facilitate all scenarios”. The offering includes an AI neuron module to perform real-time labelling and deliver automatic performance optimisation and protection for all wavelengths in an optical network.

In an interview with Optical Connections at the Geneva conference, Jin (pictured right above) also promised new product launches at the forthcoming European Conference on Optical Communication (ECOC) in Rome, on 24th-26th September.

Chinese cloud and ecommerce giant Alibaba recently announced that it was opening a new data centre in London, only its second in Europe after a partnership agreement with Vodafone established a data centre in Frankfurt some years ago. Alibaba arch rival Tencent is also aiming to expand its cloud business in Europe.

Asked whether he thought the emergence of Chinese cloud companies in Europe would help Huawei’s own networking business to support their connectivity and operations as a “Chinese-friendly” partner, Jin said: “It is not just about Chinese cloud and internet companies, all major Chinese companies should be looking to build their own data centres in Europe, and we are happy to help them.”

On the progress of the overall 200G and 400G market globally, Jin said Huawei, Ciena and Nokia are the major vendors. He said: “If you look at 200G, according to IHS’ market research reports, Huawei has the largest percentage of the market globally when not including the US market,” [from which Huawei is largely excluded].

And when it comes to disaggregation requirements among the hyperscalers like Google, Microsoft, Amazon and Facebook, Jin confirmed Huawei would remain focused on being a one stop shop for selling complete connectivity solutions to the overall market. Those hyperscalers increasingly want component level and white box solutions to enable them to cut their costs and increase their own operational flexibility.

Jin would only add: “Huawei is open to all industry development trends, we hope to help our customers maximise their business value and minimise TCO by continuous technological innovations.”

The new 600G solution is going some way towards that.