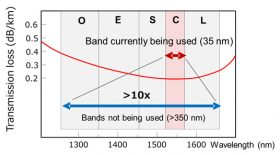 Previously, in order to expand transmission capacity between datacentres, operators had to either increase the number of optical fibres being used, or they needed receivers supporting each band of wavelengths. Now, Fujitsu Laboratories has developed the world’s first broadband wavelength conversion technology that can batch convert C-band optical signals to new wavelength bands, including L-band and S-band, reconverting them back to the original C-band when received. By developing a system that converts optical signals in C-band to L- and S-bands before multiplexing and transmitting them, Fujitsu says it has successfully demonstrated in principle that transmission capacity could be tripled.

This allows datacentre operators to use existing equipment as-is to raise the efficiency of optical fibre utilisation and thereby expand transmission capacity. This promises to eliminate the kind of network bottlenecks that could pose challenges for high-volume users that need to store, back up, or perform parallel analysis on large volumes of data distributed between multiple datacentres. This includes cases that many expect to increase dramatically in the near future, such as transfers of unstructured data, including 8K video material and device log information connected through 5G networks.

From a technical standpoint, the C-band optical signal is combined with two pump lights, generating a signal with mixed wavelength. The pump lights change the signal’s refractive index of a nonlinear optical medium which the signal passes through, and outputs converted signals at a different wavelength. A similar principle is used on the receiver side to return the transmitted optical signal to the C-band.

With this newly developed technology, it becomes possible to convert an optical signal to an arbitrary wavelength band efficiently by choosing the wavelengths of two pump lights, based on the chromatic dispersion characteristics of various nonlinear optical media. Additionally, this technology can reduce the noise superimposed on the signal after wavelength conversion by synchronously controlling the pump lights. This means it can simultaneously convert the signal’s wavelength efficiently while maximising the quality of the optical signal.