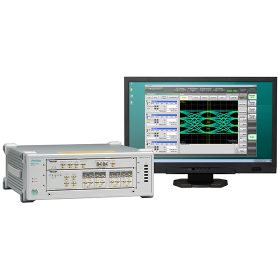 Anritsu Corporation has announced the start of firmware downloads adding a 53 Gbaud PAM4 analysis function to the previous 26 Gbaud support for the company’s BERTWave MP2110A sampling oscilloscope that is targeted at production and inspection of optical modules. As well as featuring both high-sensitivity and high-speed measurements, with this release the the MP2110A now supports development and production-line inspection of the next-generation QSFP-DD optical transceivers that are expected to be deployed in datacentres.

As noted by Anritsu, the background to the development of the new capability is that data traffic is growing exponentially due to the spread of flat-rate video streaming and other cloud services. Coping with this growth requires deployment of transmission equipment interfaces exceeding speeds of 100 Gbits/s, and 200/400 GbE interfaces have already started appearing. Moreover, this 200/400 GbE transmission format uses PAM4 technology, instead of the older NRZ technology.  Although currently manufactured optical modules, such as CFP8 and so on, use 26 Gbaud PAM4 optical signals, future mass-produced QSFP-DD and OSFP modules will use 53-Gbaud PAM4 optical signals.

Responding to this, Anritsu has added a 53 Gbaud PAM4 analysis function to the previous 26 Gbaud support for the MP2110A. As well as NRZ technology, the sampling oscilloscsope also supports PAM4 signal measurements, including TDECQ, enabling all-in-one quality evaluations of optical modules at speeds from 25 to 400 G. In addition, according to the manufacturer, the instrument is designed to play a key role in improving optical module production-line productivity. Moreover, adding 53 Gbaud support for quality evaluation of next-generation optical modules helps cut capital equipment renewal costs.

The 53 Gbaud analysis function added by the upgrade is included in the PAM4 signal analysis software option MP2110A-095.