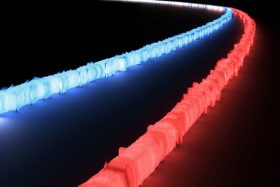 MIT researchers have designed an optical filter on a chip that can process optical signals from across an extremely wide spectrum of light at once. The researchers say this is something never before available to integrated optics systems that process data using light. The technology may offer greater precision and flexibility for designing optical communication and sensor systems, studying photons and other particles through ultrafast techniques, and in other applications.

Optical filters are used to separate one light source into two separate outputs: one reflects unwanted wavelengths – or colours – and the other transmits desired wavelengths. Existing optical filters, however, have trade-offs and disadvantages. Discrete (off-chip) “broadband” filters, called dichroic filters, process wide portions of the light spectrum but are large, can be expensive, and require many layers of optical coatings that reflect certain wavelengths. Integrated filters can be produced in large quantities inexpensively, but they typically cover a very narrow band of the spectrum, so many must be combined to efficiently and selectively filter larger portions of the spectrum.

Researchers from MIT’s Research Laboratory of Electronics have designed the first on-chip filter that, essentially, matches the broadband coverage and precision performance of the bulky filters but can be manufactured using traditional silicon-chip fabrication methods.

“This new filter takes an extremely broad range of wavelengths within its bandwidth as input, and efficiently separates it into two output signals, regardless of exactly how wide or at what wavelength the input is. That capability didn’t exist before in integrated optics,” says Emir Salih Magden, a former PhD student in MIT’s Department of Electrical Engineering and Computer Science (EECS) and first author on a paper describing the filters published in Nature Communications. Magden is now an Assistant Professor of Electrical Engineering at Koç University in Turkey

The new device could be useful, for instance, for sharper signals in FTTH installations, which connect optical fibre from a central point directly to homes and buildings, says Wim Bogaerts, a Professor of Silicon Photonics at Ghent University. “I like the concept, because it should be very flexible in terms of design,” he says. “It looks like an interesting combination of ‘dispersion engineering’ (a technique for controlling light based on wavelength) and an adiabatic coupler (a tool that splits light between waveguides) to make separation filter for high and low wavelengths.”