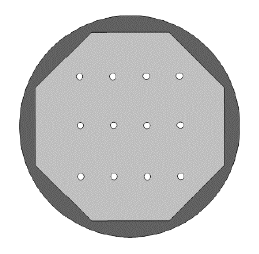 After a first phase of design optimisation, an optical fibre, including twelve Erbium/Ytterbium co-doped cores, has been fabricated by a partnership of iXblue and Photonics Bretagne. The duo worked together as part of the Evolution des inFrastructures de réseaux de Fibres optiques grâce à L’Amplification à fibres Multi-coeurs (EFFLAM) project.

The development can be viewed in the context of fast growing transmission capacity needs worldwide, where multicore optical fibres have attract a great deal of interest over several years. As well as multicore passive optical fibres, active multicore fibres are seen as a key technology that will allow the implementation of more efficient and more flexible optical amplifiers, but is also suited for other applications such as lasers or sensors.

The new active optical fibre has been characterised and delivered to Lumibird,the enterprise in charge of developing fan-in/fan-out technologies that will allow the integration of the advanced fibre into an amplifier prototype. Its evaluation by end-users (Ekinops and Orange), in terms of both optical performances and power consumption, is expected by the project end.
https://www.ixblue.com/
https://www.photonics-bretagne.com/en/homepage/