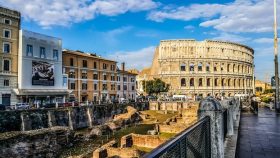 Italy’s Fastweb has boosted a connection spanning over 950km to 300Gbps on its long haul backbone network, using Coriant’s CloudWave Optics technology. The improved long distance service has been implemented without special amplifiers, tuning or changes in field hardware.

The 300Gbps connectivity service links Fastweb PoPs between Rome and Milan via Turin (more than 950 km) and via Florence-Bologna (more than 800km). Fastweb, which is part of the Swisscom Group, provides voice and data services to 2.4m households and businesses in Italy.

The long haul backbone network of Fastweb was built in 2010 and was already equipped with the Coriant hiT 7300 Multi Haul Transport Platform, delivering 100Gbps coherent, regeneration-free connections. The new CloudWave deployment, said Fastweb, boosts the capabilities of the installed network, enabling it to maximise its initial investments and meet the challenges that new cloud and hyperscale connectivity services pose.

Further deployments of CloudWave Optics are now foreseen by Fastweb, in order to implement 200Gbps and 300Gbps services across other parts of its national backbone network. The Fastweb backbone includes over 600 nodes.

Andrea Lasagna, technology officer at Fastweb, said: “A scalable and simple network approach is required to address the increasing demand for bandwidth. With the combination of hiT 7300 and CloudWave Optics technology we can light our fibres at 300Gbps between Milan and Rome leveraging the existing infrastructure.”

Wholesale carrier BICS and Fastweb recently formed a strategic partnership [https://opticalconnectionsnews.com/2018/05/bics-and-fastweb-partner-for-emeaa-connectivity/] to offer a combined connectivity solution which will bridge Europe, via Sicily, to the Middle-East, Africa and Asia. The partnership offers Fastweb access to major submarine cable systems in Sicily, and enables both companies to meet the capacity requirements and connectivity needs of operators in Europe and the other regions.