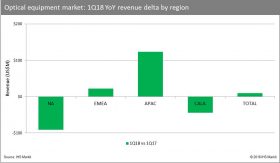 According to research from IHS Markit*, after a strong close to 2017, the overall optical equipment market got off to a lacklustre start in 2018. Global optical network hardware revenue totalled $3.1 billion in the first quarter of 2018 (Q1 2018), declining 25% sequentially and remaining flat on a year-over-year (YoY) basis.

The research house reckons modest YoY growth in Europe, the Middle East and Africa (EMEA) and Asia-Pacific was not sufficient to overcome YoY spending declines in North America and the Caribbean and Latin America (CALA) regions in the quarter. The global Q1 2018 optical equipment market net of China was additionally down 2% YoY. However, China itself was up 7% YoY, and continues to be a key market for optical transport equipment.

Wavelength Division Multiplexing (WDM) continues to be the growth engine for the market. In Q1 2018, the WDM segment totalled $2.9 billion, up 3% YoY, thanks to gains in EMEA and Asia-Pacific. Both the metro and long haul segments experienced low single-digit YoY growth in Q1 2018.

Synchronous Optical Networking/Synchronous Digital Hierarchy (SONET/SDH) continued its overall decline; global revenue came to $206 million in Q1 2018, down over 25% YoY. This segment represented less than 10% of the total optical network equipment market in the quarter.

Huawei continued to lead the total optical equipment market by a wide margin in Q1 2018. Nokia secured second place based on continuing strength in EMEA, and increasing business in Asia-Pacific. Ciena maintained its leadership position in North America and remained number three overall in the global market. ZTE rounded out the top four, but faces a difficult journey ahead with the impact of US sanctions and a subsequent halt in major operations.

On a brighter note, IHS Markit anticipates a continuing ramp in network capacity to address growing bandwidth demand. In the metro, the primary driver is burgeoning bandwidth demand – to, from and between datacentres. At the same time, factoring in bandwidth demand from such phenomena as 4K and higher video content, the shift from data to video to virtual reality/augmented reality (VR/AR), 5G, the IoT and M2M, IHS Markit believes the optical equipment market could grow at a CAGR of 4.5% from 2017 to 2022.