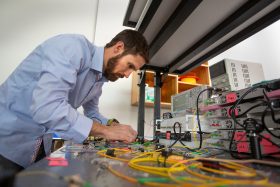 By demonstrating a new type of laser that amplifies light with sound waves in a silicon chip, a group of researchers have made what they say represents a significant advance in the field of silicon photonics.

“We’ve invested trillions of dollars in understanding silicon, because that’s the material we use to create computer chips,” says Behunin. “We can control silicon at the atomic level, make wafers of pure crystal silicon and even make a silicon crystal out of atoms that all have the same atomic weight. With this exquisite control, scientists and engineers have created devices on silicon chips that use electricity to perform all sorts of useful tasks.”

However, the wires used in those devices send and process information relatively inefficiently because of the heat generated by electric current.

“In the field we’re working in, silicon photonics, the dream is to replace a wire for electricity with its optical equivalent, a waveguide for light,” adds Behunin.

Realising the full potential of silicon photonics has challenged scientists for decades. Due to the element’s intrinsic properties, it is extremely difficult to generate laser light in silicon – a key ingredient for silicon photonics. With these findings, the team has taken a big step toward solving that problem.

The researchers demonstrated a new type of laser, the Brillouin laser, in silicon. The laser is named for French physicist Léon Brillouin, for whom the effect of light-sound scattering is also named. By designing a new, specialised waveguide, the team’s Brillouin laser uses sound to amplify light.

“We’ve only scratched the surface with this work,” concludes Behunin. “Using silicon, we can create a range of laser designs, each with unique properties customised for a specific application.”

Behunin contributed to the theory and modelling aspects of the project, the results of which were published in Science.