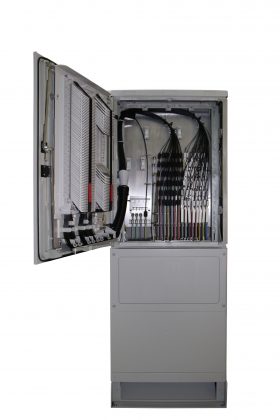 Langmatz’ optical distribution frame (ODF) EK 245, with which the company has been creating quite a sensation since its launch in 2012. A series of improvements have been made in the current successor, the ODF 2.0, which further simplify the installation and above all, operation of the distribution frame, making it more flexible. With its new model, the Garmisch-Partenkirchen-based company promises to build on its past success story, incorporating various customer requests into the redesign. The Langmatz ODF is designed as an above-ground outdoor cabinet for durable and cost-effective optical fibre distribution. The new ODF 2.0 boasts a wide range of features that significantly facilitate and support the various installation steps. The mounting panel for the E&MMS splice cassettes is attached to the inside of the cabinet door. It is no longer necessary for the installer to swivel the splice cassette section (E&MMS) during wiring and assembly of the optical fibre connections – he thus has full access to the entire working area. In addition, the door opening angle, extendible from 90 to 130 degrees, eases handling of the optical fibres. Cables are routed between the door and the cabinet interior via a flexible pipe, which securely guides the optical fibre cables from the E&MMS splice cassette area to the cabinet section on the inside of the door.

Until now there has been a persistent problem when fixing the pipes to the base plate, in that the usual clamping rings were tricky to fit, however the ODF 2.0 provides a ground-breaking solution. By using fixing lugs for the micropipes, Langmatz is able to provide optimum individual strain relief, guaranteeing secure attachment of the pipes when passing through the base plate. In addition, the Langmatz fixing lugs now enable the pipes to be more easily adjusted during installation. The removable base plate with plastic frame is an additional new feature and supports the different installation stages when fitting micropipes to the ODF.  The new version of the ODF is also eight kilogrammes lighter than its predecessor.