With the rapid proliferation of connected devices and sensors, we’re generating more data than ever before and this trend is expected to continue. In a world of exponential data growth, it raises some challenging questions: where do we store it, how do we get it where it needs to be when it’s needed, and how do we access it quickly to extract value from it? Tektronix’ Sarah Boen and David Akerson discuss the broad trends shaping the datacenter and wired communication market.

The digitization and sensorization of data in an Internet of Things world has sparked an explosion in the amount of data created.

“Over the last decade, the amount of data that datacenter managers have to comprehend has changed dramatically. In this timeframe, the industry has gone from talking about managing the flow of gigabytes of data to exabytes and zettabytes of data,” illustrates Akerson. “This data has a tremendous potential to make businesses operate more efficiently and profitably, and in some cases, provide new services to end users.”

To date, extracting the value of this data in real time has been somewhat limited by technology. Over the next decade, Tektronix predicts new technologies will emerge, allowing organizations to better capitalize on the potential this data provides.

A second trend in datacenter is PCI Express’ emergence as a storage interface. This has been driven by PCI Express’ performance advantage in providing data faster with lower latency, significantly impacting an organizations efficiency and profitability.

To illustrate why storage is getting greater attention, Amazon did a study and determined that every 100ms of latency costs it one percent in sales. Google determined that an extra 500ms in search page generation time dropped traffic by 20 percent. Another study showed that a broker could lose $4M per millisecond if his or her electronic trading platform is 5ms behind the competition. For these companies, legacy interfaces don’t cut it, prompting them to move to NAND based storage utilizing the PCI Express interface.

“Whether an organization is storing data in the cloud or locally, the challenge of delivering large amounts of data with low latency will continue to drive advancements in storage interface standards and the introduction of new technologies” says Boen. “Storage interfaces and standards, such as PCIe Express are advancing quickly with PCI Express Gen4 (16 GT/s) storage products in development and Gen 5 (32 GT/s) on the horizon. To keep pace, the SCSI Trade Association announced its 24G Serial Attached SCSI (SAS4) specification.”

Along with changes in storage and server technology, network communication technologies are going through similarly dramatic changes to provide faster data transmission. With these changes, the level of complexity has, and will continue to increase.

A key challenge facing manufacturers is also the uncertainty of which technology to use. “There’s a sheer lack of clarity on what technology is going to work, and so many are implementing multiple technologies,” Boen says. “If you look at roadmaps of different customers, you’ll see 28GBd PAM4 and also 56GBd NRZ, which is the traditional signaling methodology. 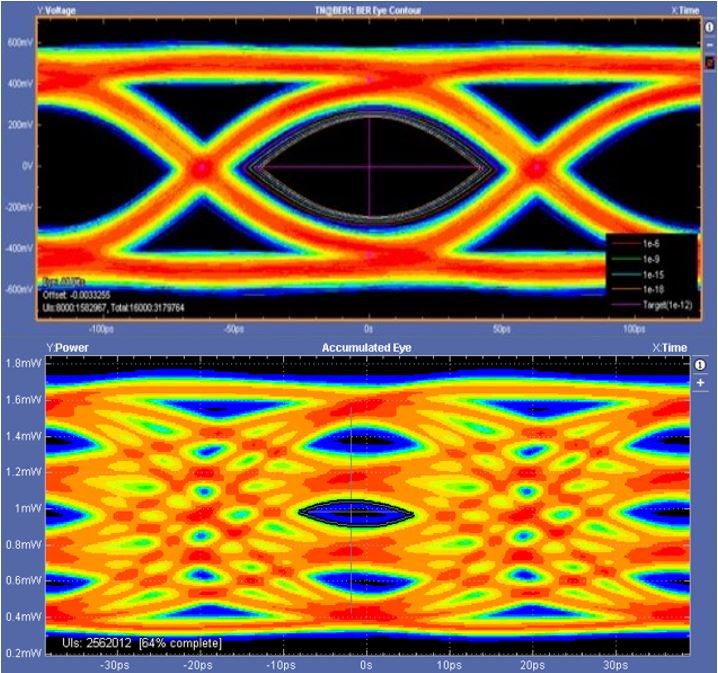 They’re doing both to hedge their bets, because they’re not exactly sure what’s going to work best, and the signaling technology might work better in one application versus another.” As Boen explains, there are a few ways manufacturers are trying to adapt to these complexities. “The first thing they’re doing is simulation upfront on how things work. This includes overclocking existing product to see how it’s going to run faster.”

Another broad trend in datacenters and wired communication is who’s driving technology changes. “In the past, the datacenter interconnect was really driven by IEEE or OIF-CEI,” explains Boen. Now, she says, large datacenter operators like Amazon, Apple, Facebook, Google, and Microsoft are really pushing the technology forward and not necessarily waiting for standard to be completed.

“New standards and interface technologies still won’t be enough to keep pace with the large data demands,” according to Boen. That’s why she predicts that datacenters will move closer to the sources of data, and get smaller as a result. This will be especially critical for so-called hot data—that is, data that needs to be acted upon quickly.

Measurement Technology in a Changing World

These broad trends contribute to new testing challenges that must be overcome. The interplay of new standards, approaches, and technologies makes measurement more important than ever before. “Design complexities are a lot greater,” says Akerson. “You have to run more tests to make sure your product is solid.”

As datacenters and datacenter technology change, the methods we use to measure our designs must change as well. From new modulation schemes to new interconnect protocols, from expanding datacenters to optical links, to big data and the changes in how standards are developed, one aspect of wired communication remains constant: testing will continue to be a critical factor in the success of a project.