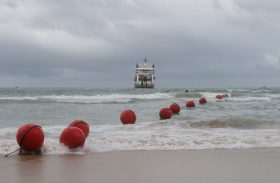 Angola Cables, a dedicated wholesale carrier based in West Africa, is offering its customers customized amounts of capacity with Ciena’s GeoMesh Extreme Spectrum Sharing capability. The operator is making available differentiated virtual fibre pairs, which are dedicated and upgradeable portions of the overall optical spectrum, to end-users over a shared physical fibre pair. Customers can access Angola Cables’ spectrum sharing capability on the MONET subsea cable, which is now live between Boca Raton, Florida and São Paulo, Brazil, with a branching unit extension to Fortaleza, Brazil.

Angola Cables is one of the leading capacity providers for the African West Coast and is also a service provider on the MONET subsea cable, an Open Cable system, where each consortium member can select the submarine line terminals for its cable fibre pairs, providing customers greater flexibility and choice of technology. Its customers can manage their own traffic and submarine line terminal equipment (SLTE) without the risk of impact to and from other users sharing the common open cable system. The primary benefit of Ciena’s Spectrum Sharing capability is that it provides secure, cost-effective, and reliable connectivity in the form of highly flexible spectrum partitioning allowing Angola Cables to offer virtualised fibre pair products to their end-customers.

Ian Clarke, vice president, Global Submarine Systems at Ciena says, “Innovative submarine operators like Angola Cables are taking note of new ways to get the most out of their existing assets to continue to differentiate service offerings. At Ciena, our Adaptive Network vision guides submarine network providers’ efforts to aid their customers in addressing increasing capacity demands. Leveraging programmable infrastructure and software control for scale, self-configuration and optimization, an adaptive network ensures subsea networks can truly adapt to change in network environments and respond accordingly.”