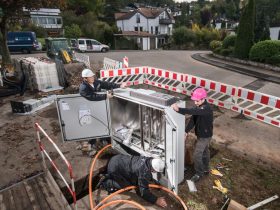 Deutsche Telekom, which claims to be the only company investing as much in broadband expansion in rural areas of Germany, says it is planning a new push to provide FTTC in rural as well as metropolitan areas beginning on 14th May.

Tim Höttges, CEO of Deutsche Telekom says, “We aren’t only building information superhighways between major metropolises and population centres; our network also extends to rural areas. We are the only company pursuing comprehensive broadband expansion. Some of our upgrade projects are designed to serve tens of thousands of households, while others benefit just a handful. For us, every line counts. No other company is investing as much in broadband expansion in rural areas as Deutsche Telekom.”

At present, says DT, more than 189,000 more households in 194 cities and communities can now connect to the Internet at speeds of up to 100 Mbit/s, with a minimum of 50 Mbit/s, for downloads and of 40 Mbit/s for uploads. The cities benefiting include Paderborn, with 13,500 households, Hagen, with 7,800, Bad Pyrmont with 6,700, Leonberg with 6,000, and Wolmirstedt with another 4,500 households. Deutsche Telekom aims to provide as many people as possible with fast Internet lines – whether they live in cities or in rural areas

The copper currently in place between local exchanges and street cabinets is being replaced with fibre-optic cables which can support considerably higher transmission speeds. The existing distribution cabinets are also being converted into multi-functional cabinets which are effectively mini-exchanges. Vectoring technology is being used to make the connection to the customer faster. By reducing electromagnetic interference in lines, vectoring is able to boost bandwidth significantly. In the second half of 2018, says DT, super- vectoring technology will be implemented enabling bandwidths of up to 250 Mbit/s.