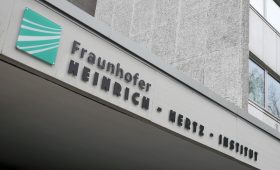 For optimized conditions, a record net capacity of 400 Gb/s was achieved using a distributedly aggregated superchannel of 3×33 GBd 32QAM sub-carriers. The development was premiered at the recent OFC 2018 expo in San Diego, earlier this month.

HHI commented that the need to establish and implement high capacity, simplified and cost-effective direct-detection schemes for short reach systems, such as data center interconnect, is propelling optical communication industries to find innovative techniques to realize these goals.

Contrary to other direct-detection schemes, the single-polarization Kramers-Kronig technique allows the reception of complex modulation formats with a single photodiode by additionally using a Kramers-Kronig carrier, which needs to be polarization-aligned to the data signal.

To avoid receiver-based polarization control, the KK carrier is usually co-generated at the transmitter. In contrast to this already existing scheme, researchers at Fraunhofer HHI have developed a novel single-polarization Kramers-Kronig receiver scheme, which is based on the generation of an inherently polarization-aligned Kramers-Kronig carrier in the receiver.

The combination of a distributed superchannel aggregation based on optical bus topology and the receiver-based KK carrier generation, enables KK reception of ultra-wideband signals without using ultra-wideband transmitters.

How HHI achieved this
The researchers distributedly aggregate a 3×33 GBd superchannel spanning more than 100 GHz with a 495 Gb/s gross rate using the bus topology concept. In the scheme, a master continuous wave is propagated through the bus and collects locally generated sub-carriers of each optical node along the bus.

Each sub-carrier in the superchannel was detected with error-free performance and a 400 Gb/s payload was achieved. This is the highest capacity reported so far for single-polarization single-photodiode KK reception, said HHI.

By applying this technology to short reach and metro-haul optical networks (such as in data center interconnects), the cost and complexity of the communications environment could be reduced.