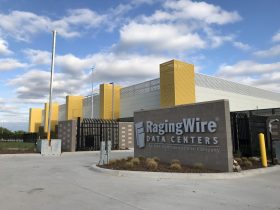 RagingWire Data Centers, a data center provider in the USA, and its parent company NTT Communications, the information and communications technology solutions and international communications business within the NTT Group, have announced that NTT Com has exercised its option to purchase the remaining shares of RagingWire and acquire 100% ownership of the company.

As part of this investment, NTT Com named RagingWire its Americas data center platform responsible for NTT Com’s data center business in the United States, Canada, Latin America, and South America under the global Nexcenter brand. NTT says that RagingWire is “one of the largest data center companies in the world and most financially strong”.

In January 2014, NTT Com acquired an 80% equity stake in RagingWire. By joining the NTT Com family of companies, RagingWire became part of one of the largest data center companies in the world with more than 140 facilities in over 20 countries and regions.

Since this time and with the financial backing of NTT Com, RagingWire has more than doubled in size bringing online 60 MW of capacity at its Ashburn VA2 and VA3 data centers, the Dallas TX1 Data Center, and the Sacramento CA3 Data Center. RagingWire has also taken a leadership role on the global steering committee for NTT Com’s data centers, helping to set consistent design standards, operations, and sales contracts worldwide.

“Since joining the NTT Communications family of companies, RagingWire has become a linchpin in our global data center strategy. Their award-winning design, 100% availability operational model, and industry-leading sales and marketing have been critical to our growth worldwide.”

Early start-up
Founded in the year 2000, RagingWire was one of the early start-ups that helped to create the data center colocation industry, which has grown to a multi-billion dollar industry worldwide. Today the company has 1.5 million square feet of data center space with 113 megawatts of power in the US. In the past four years, RagingWire has become a leading provider of wholesale data centers for top enterprises and cloud companies.

Its latest designs being deployed in mega campuses in top data center markets in the U.S. offer flexible and highly-efficient options for power and cooling, global telecommunications, and cloud connectivity. These campuses and facilities also feature advanced security systems for perimeter defense, asset protection, and monitoring.

“By joining NTT Communications, RagingWire became a global company with access to NTT’s financial strength, global data centers, and world-class information and communications technology (ICT) solutions,” said Douglas Adams, CEO and President of RagingWire Data Centers. “Thanks to the support we have received from NTT Com, RagingWire is uniquely positioned to meet the data center needs of large enterprises and hyperscale cloud companies that require available data center capacity in the top U.S. and international markets.”