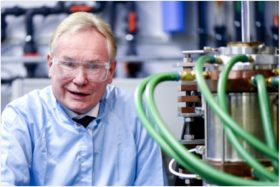 The University of Southampton’s expertise in photonics and fibre optic technology has been recognized with the award of a prestigious Queen’s Anniversary Prize for Higher and Further Education. The Queen’s Anniversary Prizes are the UK’s most prestigious form of recognition for a UK academic or vocational institution, with approval directly from The Queen and Parliament. A delegation from the University will travel to Buckingham Palace in February 2018 to formally receive the prize.

This year’s Queen’s Anniversary Prize for Southampton recognises the many decades of inspired innovation by the University’s Optoelectronics Research Centre (ORC), a vibrant community of over 200 staff and postgraduate students working on cutting-edge research in photonics – the science and technology of light – to provide solutions for real-life problems.

The work of the ORC – the largest and longest established centre of its kind in the UK – has led to breakthroughs in optical fibres, laser manufacturing, next generation computing and new optical materials that power the internet, feed mobile telephone networks and help make life-saving devices that transform our daily lives.

Industry links
As well as its extensive links with companies and universities around the world, the Centre – which leads a new national manufacturing hub for the UK – has also been responsible for developing a major research and commercial nucleus within Southampton and the surrounding area with at least 10 companies ‘spinning out’ to provide employment and inward investment to the region from its work.

The ORC is also renowned for its wide range of outreach activities with schools and colleges, delivering activities designed to encourage more students to study physics and support the teaching of photonics in schools whilst engaging them in research and the wider promotion of careers within physics and engineering. Activities including the Photonics Explorer workshop and The Light Express Roadshow reach thousands of school-age pupils and students each year.

‘Photonics so important’ – David Payne
Professor Sir David Payne, Director of the Optoelectronics Research Centre, says: “Being honoured with this prestigious award is recognition of just how important photonics is to the UK and the extensive role the University of Southampton has played in leading photonics research since the 1960s.”

Sir David, who was knighted in 2013 for his work in photonics research and applications development, explained the legacy of the ORC. “Over fifty years ago the ORC received global recognition for developing one of the world’s first ultra-low loss optical fibres. From there we were the first to announce another vital component that allows the internet to span the world, the optical fibre amplifier that periodically boosts the signals. Today hundreds of millions of kilometres of optical fibre carry the signals on the internet.

“Our specialty optical fibre inventions now navigate airliners, cut steel and can be found on the moon, Mars and the International Space Station,” he continued. “These special fibres are capable not just of carrying internet data, but have many different applications such as in gyroscopes, high-powered lasers, and perhaps one day even propelling spacecraft through the universe.”

Sir David is now keen for his colleagues to continue pushing back the boundaries of research and commercial application using materials not conceived when the ORC was first founded. “Despite 50 years of research, photonics today is still in its infancy,” Sir David adds. “Much like the early days of electronic computing, photonics is not yet integrated, and data to our homes is still serviced largely along copper wire.

Next big challenge
“The next big challenge in photonics is how we make everything smaller, more complex, more functional, and cheaper,” he concludes. “This requires the development of new materials which don’t exist in the natural world, such as metamaterials and silicon itself for the development of tiny silicon optical chips. There is in prospect a new generation of hollow fibres which can carry even more data, at far greater speeds, so the world can realise the capabilities of 5G and beyond.”

Professor Bashir Al-Hashimi, Dean of Physical Sciences and Engineering, says, “I would like to congratulate Professor Sir David Payne and his talented research community on earning such an esteemed prize and sustaining such excellent standards in our high-performing faculty. Researchers at Southampton have been pioneers in this evolving field for over half a century and I am confident that the Optoelectronics Research Centre’s interdisciplinary research will continue shaping global technologies well into the future through our world-class facilities.”