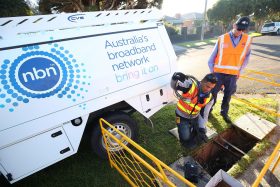 Next-generation Gfast technology to be launched in 2018.

“Using Gfast means we will be able to deliver ultra-fast internet capability to our Fibre-to-the-Curb and Fibre-to-the-Building customers, giving them access to transformative, ultra-fast services more rapidly and cost-effectively than over a Fibre-to-the-Premises connection,” said JB Rousselot, chief strategy officer at nbn.

600Mbps
nbn trialed Gfast technology in October 2015, achieving speeds of 600Mbps on a 20 year-old stretch of 100 metre copper cabling, and will conduct further testing before its 2018 launch. In bringing Adtran Gfast solutions into nbn’s Multi Technology Mix, the operator will be able to deliver ultra-fast speeds on its FTTB and FTTC networks.

“nbn is advancing the rapid deployment of sustainable ultra-fast and Gigabit broadband services in Australia. In applying Gfast, it is ensuring its users will more quickly realise the benefit of these services without sole dependence on FTTP,” said Jay Wilson, senior vice president, technology and strategy at Adtran.

In addition to being the world’s most trialed, Adtran Gfast solutions have been selected for deployment by the some of the world’s top internet service providers in five commercial nationwide rollouts across four continents and numerous regional deployments.

G.fast represents the next step in the evolution of nbn Fibre-to-the-Curb, and will be deployed where ultra-fast speeds are required. The technology further advances nbn’s Multi-Technology-Model and will deliver speeds of up to 1Gbps over copper lines by using higher frequencies of 212 MHz to bolster broadband speed, performance and capacity.

Ken Sheridan, NetComm Wireless CEO said, “We are pleased to work with nbn on the delivery of their fast broadband performance today with an upgrade path to Gigabit services when required. NetComm Wireless was recently named winner of the nbn Scaling Excellence Award for our outstanding contribution to the fast and economical rollout of nbn™ FTTC, and we look forward to facilitating its progression in line with demand for next-generation broadband network access.”

JB Rousselot, Chief Strategy Officer of nbn added, “Bringing G.fast technology to the nbn access network in 2018 again shows our commitment to being at the cutting edge of emerging technologies. Delivering G.fast to our FTTC and FTTB end-users will allow us to bring them ultra-fast services faster and more cost effectively than if we had to deliver them a full Fibre-to-the-Premises connection.”