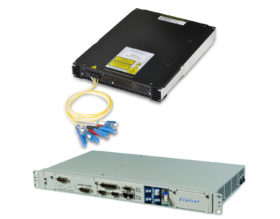 The company presented Flextune as well as its UltraSpan optical amplifiers for remote PHY access networks and 200 Gb/s coherent optical transceivers for business services during the SCTE Cable-Tec Expo in October in Denver, Colorado, USA.

Flextune allows up to 96 wavelength-tunable optical transceivers in a remote PHY network to self-configure their wavelengths to operate over the DWDM infrastructure without input from the host equipment nor intervention from technicians.

“Cable operators only need to stock one universal wavelength-tunable transceiver instead of needing to stock many different fixed-wavelength modules. Flextune reduces configuration time of the transceivers for a link from hours to minutes. In addition, it simplifies installations because technicians do not have to trace fibres from the optical multiplexer to the Remote PHY nodes, which could be a distance of 2km or longer.”

Finisar’s 10 Gb/s wavelength-tunable duplex and dual-band bidirectional (BiDi) transceivers will offer the Flextune feature. The latter was introduced in September 2017 as the industry’s first tunable dual-band BiDi SFP+ transceiver which fits a pair of wavelengths into each port of standard 100GHz DWDM multiplexers and de-multiplexers.

This allows 80 wavelengths to be deployed over existing 40-wavelength DWDM networks, increasing the data capacity from 200 Gb/s to 400 Gb/s in each direction over a single fibre without replacing the entire infrastructure. Because it only has one optical connection for the pair of wavelengths, the BiDi transceiver also reduces the number of fiber optic patch cables by a factor of two, simplifying installation and saving space.

During SCTE next week, Finisar displayed its UltraSpan optical amplifiers which extend reaches of Remote PHY access networks to 80km and longer, and coherent optical solutions that can deliver up to 200 Gb/s on a single optical wavelength to enterprises.