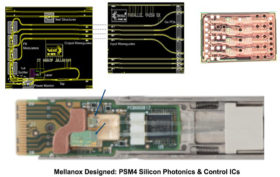 Mellanox Technologies, a maker of high-performance, end-to-end smart interconnect solutions for data centre servers and storage systems, and Accelink Technologies, a manufacturer of end-to-end optoelectronics components, have introduced a 1550nm 100Gb/s PSM4 transceiver based on the silicon photonics optical engine from Mellanox.

Serving the growing demand of hyperscale Web 2.0 and cloud interconnects, the new Accelink transceiver provides customers with an additional source and full interoperability with PSM4 transceivers from Mellanox.

“We are delighted to announce Accelink as a partner and customer for our optical engine,” said Amir Prescher, senior vice president of business development and general manager of the interconnect business at Mellanox.

‘Most cost-effective 100G transceiver’
“PSM4 represents the highest volume, most cost effective and flexible 100Gb/s transceiver for single mode fiber in data center applications. Customers benefit by having more supplier options; Mellanox and Accelink both benefit by expanding the market for 100Gb/s products.”

“Chinese Web 2.0 and datacenters are transitioning to 100Gb/s networks so the timing is perfect for us,” remarked Zhang Jun, General Manager at Accelink. “The fully qualified Mellanox optical engine significantly reduced our time to market. With no lenses, isolators or hermetic packages, the Mellanox solution is easier to assemble and lower cost than competitor solutions.”

The Mellanox optical engine solution was announced earlier this year at OFC 2017. The components are fully qualified for use in low-cost, electronics-style packaging, ensuring a low-risk, and quick time to market.

Because the Mellanox silicon photonics platform eliminates the need for complex optical alignment of lenses, isolators, and laser subassemblies, customers can scale to high volume manufacturing easier and faster than using traditional technologies.