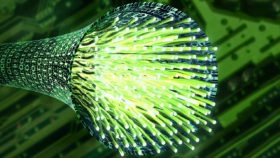 A project underway at The University of New Mexico (UNM) is aimed at demonstrating that semiconductor laser devices can send data at a bandwidth speed of over 100 Gbits/s, with potential applications that could result in ten times the speed of current fibre optic networks.

The project addresses the need for faster data transfer by increasing the speed at which signals are first generated to send through a fibre optic network. It involves a multidisciplinary research team that is led by UNM Electrical and Computer Engineering (ECE) Professor Marek Osiński, and includes Gennady Smolyakov, ECE Research Associate Professor, a senior collaborator on the project.

For the past two and half years, work has centred on numerical simulations of proposed devices. This was funded by a $400,000 grant which will conclude in September. Now, the US Office of Naval Research has awarded UNM a $1.3 million grant, funded for three and a half years, to continue with a proof of concept demonstration, moving from theory to the laboratory.

The laboratory work will be performed at UNM’s Center for High Technology Materials (CHTM).

In a posting on the UNM Newsroom website, author Sharon Steely quotes Prof. Osiński: “Development of inexpensive ultrafast chips operating at speeds exceeding 100 Gbits/s will have a huge societal impact by increasing the transmission capacity of fibre-based networks.”