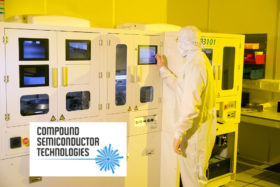 CST Global, a subsidiary of Sivers IMA Holdings AB, has announced that its indium phosphide laser sales have exceeded 25 million units and its sales of DFB lasers into Chinese and Indian GPON markets are now approaching 2 million.

CST Global’s CEO, Neil Martin, commented, “Achieving 25 million InP lasers sales in the PON markets and almost 2 million DFB laser sales in the Chinese and Indian GPON markets represent significant milestones for CST Global. However, we had identified the market potential and have invested in the staff, machinery and processes necessary to support this growth.

“Capacity and yield have increased due to our qualified, 4 inch wafer process, MOCVD capability, Automatic Bar Stacker and Automatic Visual Inspection. We operate in an ISO 9001:2015 quality environment; essential to attracting new, world-class customers in the data centre, cloud and telecommunications markets. Finally, we have new staff appointments in critical Operations and Sales and Marketing roles.”

Andrew McKee, Director of Engineering at CST Global said, “The massive growth in broadband communications for the Fibre to the Premises market has two, key, driving factors. The first is a rapid increase in demand for single-mode, semiconductor laser solutions, currently exceeding 100 million new units per year.

“The second is that the data rate capability of lasers using current Passive Optical Networking (PON) technology, at around 1.25-2.5 Gb/s, is not enough to satisfy the ever-increasing bandwidth demands of next-generation networks.

“Nano-imprint lithography is widely recognized as the most credible method of producing high throughput, high-resolution, single-mode, semiconductor lasers at low cost. The lasers also operate in the 1310 – 1550nm wavelength spectrum, which is known to support the increased line rates necessary for next generation networks.”

The DiLaN project is seeking to implement a commercially viable, nano-imprint lithography production process for high volume DFB semiconductor lasers. This would deliver the increased data rates of 25Gbps and the required cost saving, estimated at up to 30% per laser. CST Global is the project leader, with support from academic partners Cardiff University and the University College of Swansea & West Wales, UK, with additional commercial partner Compound Semiconductor Centre Limited, Cardiff.

The DiLaN project grant is valued at £821,319.00, with CST Global receiving £268,094.00. The funding organization is Innovate UK, a UK government, research funding agency for engineering and the physical sciences. The DiLaN project runs from February 2017 to January 2019.