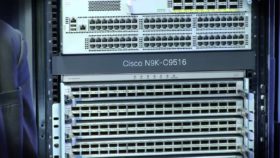 Cisco’s new Nexus 9516 Switch has put up some serious performance numbers of its own such as the ability to handle more than 1 million IPv4/v6 routes and a record 10.2 million multicast routes, all the while dropping zero packets during grueling stress tests across its fully loaded 1024 50G-Ethernet ports.

The test was independently conducted by Network World, and was the highest density core-switch test ever reviewed by the publication. The publication established the record-setting capabilities of the Nexus 9516 switch in its “Clear Choice Test”, including putting some of these records into some perspective from technical analyst David Newman:

Among the key results
• Line-rate throughput for all frame sizes in tests involving IPv4, IPv6, and multicast traffic
• Support for more than 1 million IPv4 and 1 million IPv6 routes
• Support for 10,000 IP multicast groups and 10.2 million multicast routes. Both numbers are the highest levels ever achieved in multicast testing of a single system
• Power consumption between 13-22 watts per port

The switch test involved not only blasting the fabric with Ipv4 and IPV6 unicast and multicast traffic but also fully loaded the switch control plane with BGP routing state. To scale intra and inter data center communications, customers are leaning towards BGP as a choice to scale efficiently.

More than 1 million IPV4 and Ipv6 routes provides a solid foundation to any DC architect to scale and future proof their data centre. According to the review, “the Nexus 9516 was able to forward traffic at line rate, regardless of frame size, without dropping a single frame.”

The publication concluded, “Low average latency and Jitter makes this switch ideal for high-performance computing and high-frequency trading applications along with other delay sensitive applications like voice and video.”