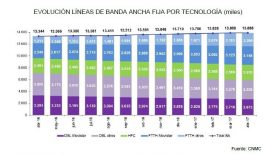 According to the latest figures from Spanish regulator, Comisión Nacional de los Mercados y la Competencia (CNMC), the total national FTTH market surpassed 5.4 million lines by the end of April 2017. CNMC reports that some 105,885 FTTH lines were added in April. Fibre expansión was achieved at the expense of DSL, with that technology shrinking by 90,454 lines in April. Of the DSL losses, 43,835 lines were operated by Movistar and 46,619 lines by the other operators.

In terms of the overall fixed broadband market, April witnessed an increase of 16,870 lines to reach a total of 13.88 million, representing a penetration of 29.9 lines per 100 inhabitants, compared to 28.7 a year ago.

Year-on-year to April 2017 there was an increase of 1.7 million FTTH lines, compared to the loss of 1.2 million lines with DSL technology. FTTH market leader is Movistar, with 3.1 million lines, or 58% of the total.