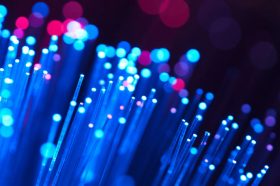 UK infrastructure company Openreach has unveiled what is billed as the world’s first ever live demonstration of a 100 Gbits/s, or ‘hyperfast’, broadband service. The demo, which uses technology developed in conjunction with Huawei, was showcased at BT’s R&D centre at Adastral Park.
The demonstration uses a standard residential Fibre-To-The-Premises (FTTP) connection with new, but unspecified, transmission technology that could boost the broadband signal with enough capacity to stream 4,000 ultra HD quality movies simultaneously.
The test equipment used in the demo has been designed to replicate a fibre connection, in a real-life setting, with a single fibre carrying a 100 Gbits/s signal from exchange equipment and transmitted over standard technology used in Openreach’s existing FTTP network.
“This is the first time this has been demonstrated in public, and because we’re using standard infrastructure we can show exactly how we‘d transmit data to a customer’s premises,” observed Mark Lam, Openreach Chief Information Officer. “It demonstrates a massive hike in speed – the highest we’ve see worldwide. in fact it’s so fast that it’s actually very hard to transmit anything over it that can properly illustrate the capacity. It would pump more bandwidth into your home than the TV broadcasters use to transmit their raw footage from a football match.”

During the next phase of testing, Openreach and Huawei will apparently try and use the high bandwidth technology they have developed to evolve global Passive Optical Network (PON) standards, and push towards field trialling the technology as the industry chain matures.
Read more: https://www.openreach.co.uk/orpg/home/index.do